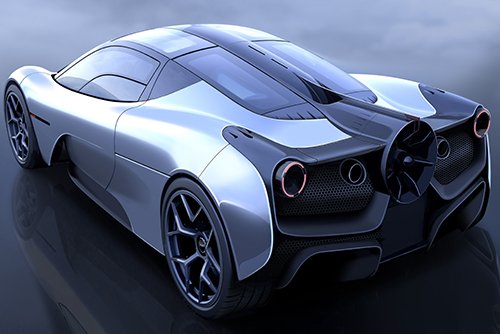 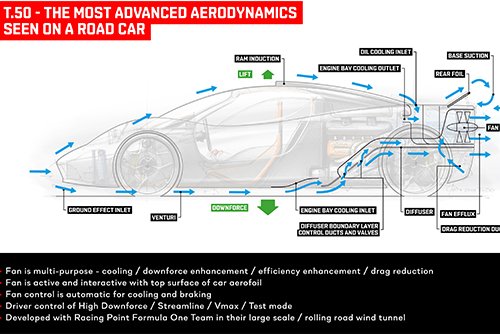 The Gordon Murray Automotive T.50 Supercar was first announced a few months ago, but new information about the vehicle has been released and the details are well worth shouting about! The original release had in-depth information about the lineage of the car along with plans for the powerplant, specs about H-Pattern gearbox, weight, braking, and more. However, visuals showing the overall design and styling were lacking.

Can you say “Fan” supercar? The new images of the T.50, along with updated information from the company, show a sleek vehicle with an ultra-modern design from nose to rear with one amazing feature. The T.50 sports a rear fan on the diffuser surrounded by exhaust and aero features.

The new image of the T.50 shows a clean and stylized overall design with a rear fan. The fan is noticeable, but not overbearing as it fits seamlessly into the car’s aerodynamic look. The front, hood, windshield, and roofline flow effortlessly into a muted centerline that morphs into the fan at the end of the rear deck. From here, the fan becomes a natural part of the rear diffuser.

According to Gordon Murray Automotive (GMA), the “driver-focused” T.50 will have the “most advanced and most effective aerodynamics ever seen on a road car.”

The 400mm ground-effect fan is an integral part of the T.50’s airflow management system. That airflow system is matched with the smooth styling and lines of the body. Add to that, the active underbody aerodynamics and dynamic rear aerofoils, you get a car with an unmatched driving experience (according to GMA). Given the resume of the man behind the brand, there’s no reason to doubt the statement.

The T.50 will feature an all-new Cosworth V12 powerplant set in a mid-engine rear-wheel-drive configuration. The V12 will be “the highest-revving road car engine ever made,” capable of 12,100rpm. Additional power comes from a 48-volt integrated starter-generator, and ram induction, to boost power to a maximum of 700hp. That extra power also plays into driver modes.

The T.50 will have six different aero modes available to the driver that “optimize the car” for different situations. The modes range from basic street and light track settings, which balance overall performance, aero, and traction. Then there is the “VMAX Mode,” which pulls in the added power from the 48-volt generator and racing slipstream technology.

GMA partnered with the Racing Point Formula One team to develop the T.50. Lawrence Stroll stated that he was honored to support the project, given Gordon Murray’s legendary status in the field of designing and engineering cars.

Only 100 units of the T.50 will be built with a starting price tag of £2 million before taxes. GMA stated that most of the cars have been sold. Deliveries will commence in January of 2022.