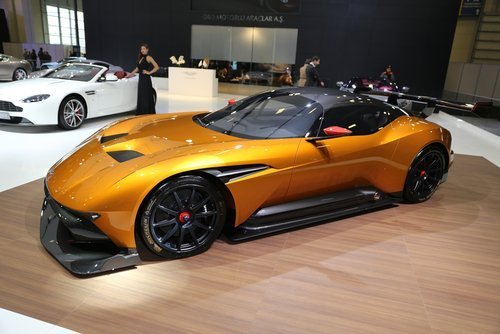 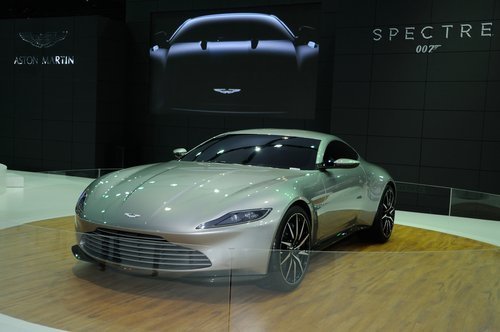 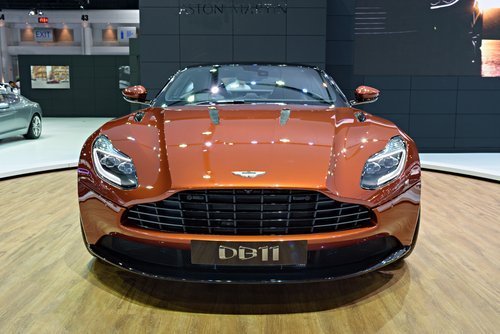 Aston Martin is a brand that’s synonymous with luxurious and powerful sports cars and grand tourers. Founded in 1913 by Lionel Martin and Robert Bamford, it was originally called ‘Bamford & Martin Ltd.’ Bamford & Martin Ltd was formed as a sales company for Singer racing cars. However, both founders nursed the ambition of building their own high-performance automobiles. Their first attempt was a car built with a Coventry-Simplex engine and a 1908 Isotta-Franchini chassis. The company was renamed Aston Martin after Lionel and the Aston Clinton hill racing course where he had competed and won in a car they built.

Unfortunately, the company struggled financially during its early years finally going into insolvency in 1926. A group of investors took over the company in the same year and renamed it  ‘Aston Martin Motors Ltd.’ After the change in ownership, Aston Martin continued to make progress with racing. In 1928, the first Aston Martin car was entered in the Le Mans 24-hour Race. In 1933, the 1.5L Aston Martin Le Mans came in 5th at Le Mans.

Participation in Le Mans helped boost the sales of Aston Martin cars. However, financial troubles continued to plague the company. In 1947, it was purchased by David Brown Ltd. This led to the genesis of the iconic DB series of Aston Martin cars. While the early cars in the series like the DB1 and DB2 showed some promise as race cars, the purpose-built DB3S was the first car in the series to show significant potential. From 1955, the DB3S won its class at LeMans for three consecutive years.

Aston Martin has a long tradition of producing hand-made cars with the goal of offering luxurious features that few rivals can match. In addition to the luxury, these cars always come with powerful engines. A hint of Aston Martin’s racing pedigree is apparent in most of its modern cars. The company has built a good number of exotic sports cars with an impeccable design style that doesn’t fail to turn heads or impress the few fortunate enough to have pocketbooks that allow them to park one in their garage.

In addition to the regular range of cars, some limited edition cars have been produced. These rare cars have elevated the brand’s profile significantly. 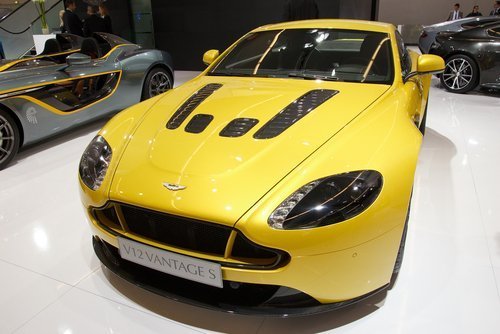 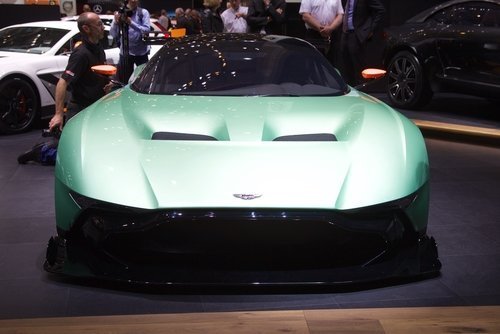 Aston Martin DBR1: An innovative car of its time, Aston Martin emerged victorious at the 1959 24 Hours of Le Mans with it. An impressive fact about the car is that it’s one of three cars in the 1950s to win both Le Mans and the World Sports Car Championship in the same year. The DBR1 used a 5-speed manual transmission and had Aston Martin’s standard triangular vent on the side.

V8 Vantage: The iconic V8 Vantage sits at the bottom of the current hierarchy of Aston Martin models. Introduced in 2005, the design stood the test of time; never looking outdated until it was recently upgraded to the new Aston Martin look first seen with the DB10.  The current V8 model has a 4.0 L twin-turbocharged V8 engine. It accelerates from 0 to 62 mph in 3.6 seconds and has a top speed of 195 mph. The V12 version of this car which has not been upgraded to the new look yet is famous for its intimidating exhaust roar and hood vents that help cool the monstrous V12 engine.

One-77: An exclusive design, the One-77 was developed in 2008 and 2009. The two-seat, two-door coupe has a carbon fiber monocoque structure with hand-crafted aluminum body panels. Equipped with a 7.3-liter naturally-aspirated V12 engine with 750hp, the car accelerates from 0-60 mph in 3.5 seconds and a top speed of 220mph. Aston Martin’s One-77 has received multiple awards such as the Good Design by The Chicago Athenaeum. Only 77 units were produced.

Vulcan: Another limited edition car, it was named after the high-altitude World War II bomber developed by the Royal Air Force of the U.K. A high-speed aircraft, the Avro Vulcan was capable of carrying both nuclear weapons and conventional bombs. Like the aircraft it is named after, the Vulcan is capable of high speeds thanks to its powerful engine. It moves with 820 hp and has a 7.0 L naturally-aspirated V12 engine propelling it from 0-60mph in 3.0 seconds and an estimated top speed of 225mph. The Vulcan is a track-only car and was first revealed at the 2015 Geneva Motor Show. There were only 24 units of the Vulcan built between 2015 and 2016.

Valkyrie: With a 6.5 L V12 engine, the Valkyrie uses an electric motor for a power boost with a body made of all carbon-fiber. This ultralight hypercar is a byproduct of Aston Martin’s work with Red Bull Racing Advanced Technologies. The goal of this collaboration is to create the fastest street-legal car. With a 6.5L engine and 1,130 hp, the Valkyrie will reach a top speed of 250 mph. The production of the Valkyrie will be limited to 150 cars. 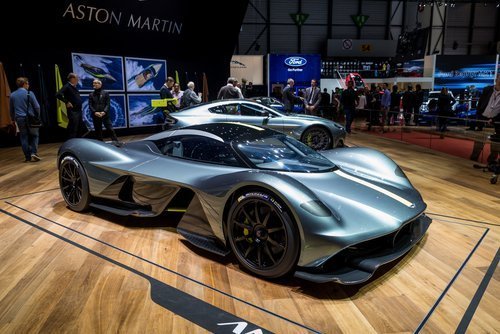 Valkyrie at the Geneva Motor Show 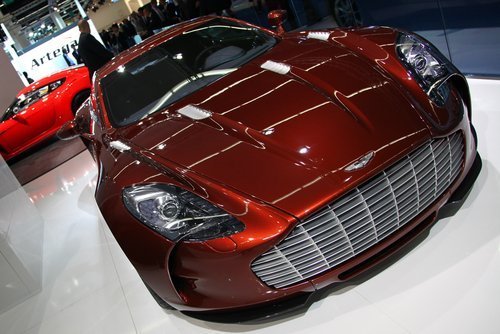 Aston Martin’s mark on pop culture is here to stay. The British car manufacturer has a 50-year partnership with the Bond films franchise which dates back to the DB5’s use in the 1964 Goldfinger film. Aston Martins have seen many thrilling car chases and action scenes with James Bond at the wheel. The 2015 Bond film, Spectre, featured the DB10 of which ten were produced with eight of them being used for filming and the other two for marketing the movie. The DB11 is the closest production car to the DB10.

From the very beginning of its existence, Aston Martin has been focused on engineering and designing high-performance cars with a focus on racing. The company’s work in motorsports has helped it become established as a leader in the industry thanks to its designs and long-running success on the race track.

AMR Division: Staying true to its racing heritage, the AMR (Aston Martin Racing) division was formally created in 2004. Since then it has seen success in the FIA World Endurance Championship, class victories at LeMans and multiple GT3 and GT4 race victories. The success of the AMR division inspired the creation of the AMR brand. Introduced at the Geneva Motor Show in 2017, cars that have been announced under the new brand include the Rapid AMR, Vantage AMR Pro and most recently the Valkyrie AMR Pro.

Affiliation with Red Bull Racing in Formula 1: Aston Martin hasn’t limited itself to just GT racing. In 2016 it was announced that Aston Martin and Redbull Racing had formed a technology partnership. Beyond marking Aston Martin’s return to Formula 1 since 1960, the partnership facilitated the development of the Valkyrie which was known back then by the code name “Project AM-RB001”. The project benefitted from contributions by Redbull Racing’s Adrian Newey a renowned race engineer and aerodynamicist who’s widely credited for the success the Redbull Formula 1 team enjoyed from 2010-2013.

Aston Martin offers interested individuals an opportunity to experience the essence of the brand at different events throughout the year. Marketed with the phrase “Art of Living”, these events include a tour of the factory, VIP access to paddocks at racing events, private driving experiences at the famous Millbrook proofing ground and breathtaking scenic tours across amazing landscapes in Europe and other exotic locations around the world. These experiences offer the true fan an opportunity to get more intimate with the brand while cementing its place as one of the top luxury car brands on the planet.