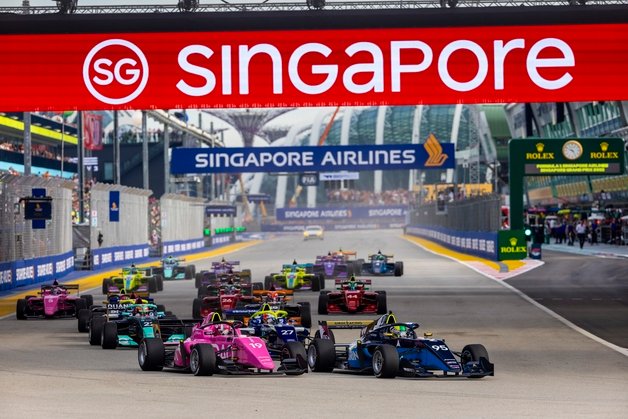 The extraordinarily long W Series summer break ended dramatically in Singapore as Beitske Visser took her first win since 2019, and double-champion Jamie Chadwick suffered her first non-finish in the championship. Visser's win represents the end of an 18-race dry run without a top-step trip for the Dutch racer who challenged Chadwick until the final round of the inaugural W Series season. The title fight will continue into the North American trio of races in the USA and Mexico, thanks to Visser taking 25 points out of Chadwick's lead.

Wet weather bookended the race in Singapore. First, a rain-hit qualifying session mixed up the grid and then drizzle began to fall in the final racing moments, although not enough to affect the result. Qualifying saw Marta Garcia take her first 2022 pole position ahead of Visser, with the only other drivers capable of stopping Chadwick from winning the championship, Alice Powell and Abbi Pulling, in P3 and P6, respectively. Chadwick, meanwhile, couldn't master the slippery conditions and would start Sunday's race in P8 with a time that was some 2.2s down from Garcia's pole lap.

Any hopes for Garcia to turn her pole into a win, as she did in her only other P1 start at Norisring in 2019, soon evaporated thanks to Visser's stellar launch. Visser's Sirin Racing car pulled alongside and had the inside line for Turn 1, netting Visser P1; a lead she would not relinquish. The twists and turns of Singapore's Marina Bay Street Circuit made passing as problematic as it was in the Formula One GP, and W Series has no DRS to assist the chasing drivers. 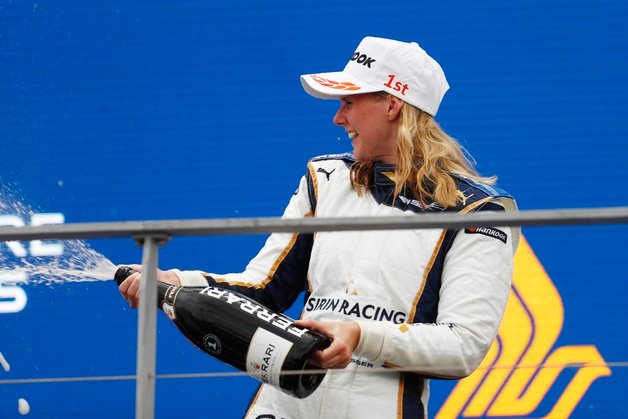 With the opening lap as the best time to make up positions, Chadwick quickly toppled one of the three racers she needed to best to take the crown. Fabienne Wohlwend's CortDAO and Pulling's Racing X fell behind Chadwick's fast-starting Jenner Racing car, with the reigning champion completing a brave move on Pulling at the outside of Turn 3. She was up to P6, but with Visser in P1, Chadwick would need to grab the lead from her Dutch rival to become a three-time champion in Singapore.

Meanwhile, the other driver in with a shot of the title, Powell, began her hunt of Garcia for P2. Powell pushed her Bristol Street Motors car right onto the tail of Garcia's CortDAO, suggesting she had far more pace than her Spanish rival. Garcia fended off the threat in the opening salvo, but Powell kept close behind.

Elsewhere, Juju Noda and Nerea Marti collided when exiting Turn 7. Noda damaged her front-right suspension and became the first retirement of the only race on the Japanese driver's home continent. 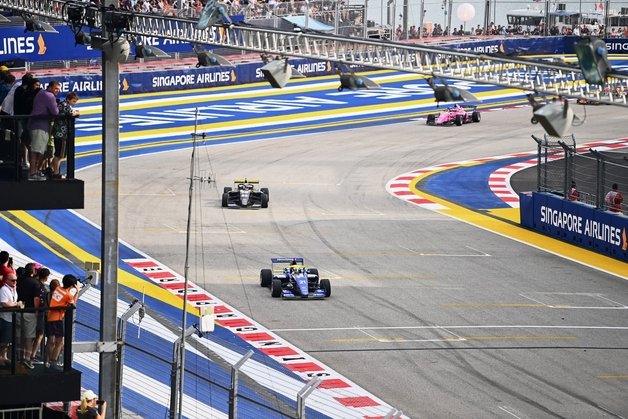 The onslaught from Powell on Garcia continued, with the British racer setting the fastest lap and sitting just 0.2s behind the Spaniard. Powell's constant pressure let her see where Garcia was vulnerable, and she made a terrific pass that began at Turn 14 and continued into the left-hand Turn 18 that heads under the Bay Grandstand. With Garcia handled, Powell set her sights on the race lead but sat 2.5s behind Visser with the race approaching its halfway point.

Although Chadwick's march through the field had halted, a wide moment over Turn 7s curb showed how much she was pushing to overtake Powell's Bristol Street Motors teammate Jess Hawkins. Chadwick was fortunate not to lose her P6 to Pulling, who sat behind, keeping a watching brief on her compatriots in front. Unfortunately, for Chadwick, it would not be the last time she went wide here.

Powell rapidly cut into Visser's lead and soon hounded the Sirin Racing's gearbox as much as she had done against Garcia in the early laps. So, Visser had to drive faultlessly to keep her lead, but Powell came close with a repeat of the move that netted her P2 at the Bay Grandstand. Fortunately for Visser, Powell's pressure dissipated after a few laps. Powell's hard work in closing the gap, and challenging for the lead, seemingly took too much life from her tires. 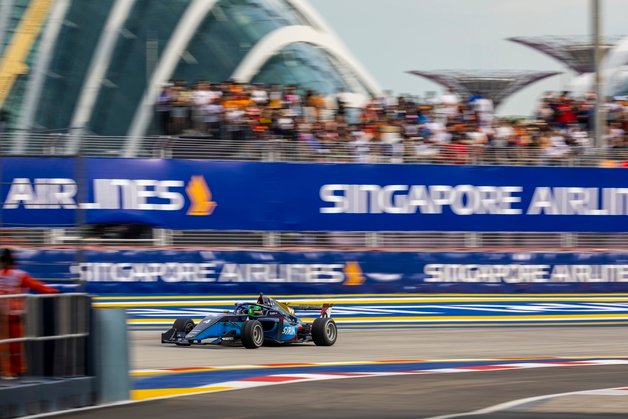 Visser's life got even more straightforward when a Safety Car slowed the field down after Chadwick's frustration got the better of her. Sitting in the wheel tracks of Hawkins for most of the race led the Jenner Racing star to try an audacious overtake on the inside of Turn 7. With four minutes remaining on the clock, Chadwick's late braking saw her jump over the exit curb with her wheels locked, and she crashed straight into the barrier to end her race and any hopes of a Singaporean title celebration.

The marshal's quick clean-up operation allowed racing to resume, but only for a single lap. Visser timed her race restart impeccably, keeping her cool for the final lap to take the checkered flag and her second W Series win. Visser also moves clear of Powell in the standings to sit P2, and 50 points behind Chadwick, with 75 points remaining.

Speaking with FORTLOC after the race, Visser explained that her start and restart helped, but she could still chase perfection: 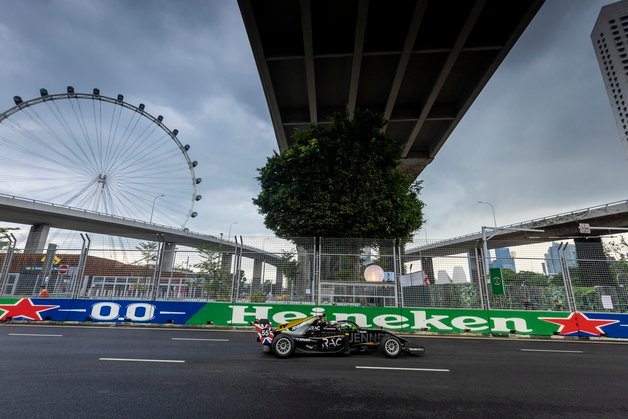 "I got a good start. I wasn't quite sure what to expect because they [Visser's mechanics] moved something around with the clutch and the biting point...

A perfect race? You can always do better, but as long as you win, it's good. Hopefully, I can carry this form into the next rounds."

Powell detailed how her racecraft left her without any grip in her Hancook tires to continue her fight for the win:

"I tried to have a go a few times... I was hoping to try and force [Visser] into a mistake or potentially just throw one up the inside, but, obviously, that's quite risky to do here. I felt like I was losing the front tires a little bit, so we dropped off and then obviously tried to push to have another go.

"Unfortunately, the front tires just went. That's just from following at this circuit and in the high temperatures as well."

Garcia rounded off the podium but was running a short distance behind the top two after some lock-ups that were down to a brake bias change over the weekend:

"When I went for Free Practice on Friday, the bias was really on the back, but it was not good. So, I moved [it] to the front, but still never got to the point that I [was happy], so I was missing some confidence on the brakes in the dry.

"Then yesterday, with the wet, obviously the brake bias was okay... It is what it is. I got overtaken by Beitske at the race start."

After W Series skipped racing in August and September, the championship will contest four October races in its final throes. Singapore is now complete, but the series will return to Austin, the site of last year's finale, on October 21-22 before two races in Mexico at the end of the month.