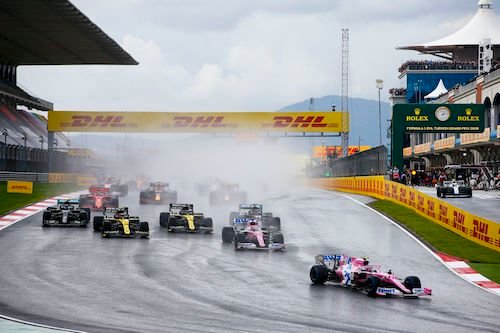 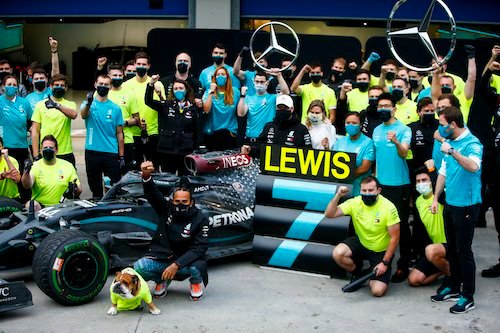 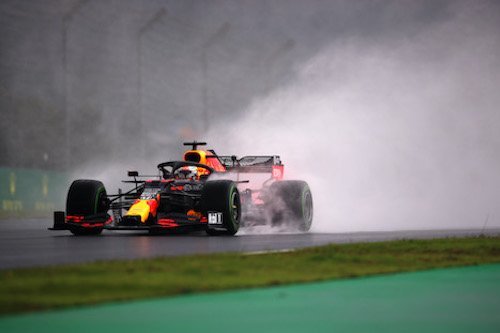 The seemingly incessant rain may have darkened the skies at F1’s return to Turkey, but it made Lewis Hamilton’s smile after his championship-clinching victory even brighter. A tumultuous weekend at Istanbul Park saw a new polesitter, fifth-gear wheel-spinning, pre-race crashes, as well as an unexpected podium. And, despite all the disorder, Hamilton demonstrated why it is he, and not his rivals, who is a now seven-time champion.

With the popular venue not holding an F1 event since 2011, the Turkish hosts opted to resurface the entire circuit in the weeks preceding the Grand Prix. The unintended consequence was an ice-rink like track surface that caught out drivers in every session over the weekend. When coupled with the heavy rainfall, the results were treacherous driving conditions for the drivers but unpredictable and hugely exciting entertainment for the fans.

After a miserable run since his Monza podium, Lance Stroll and his Racing Point team took a deserved pole position on Saturday. The Mercedes team, who had occupied P1 at every qualifying session this season, could only reach P6 and P9. By sharing the front row with Stroll, Max Verstappen was in a prime position to take his second victory of the season as the Red Bull looked to be the fastest car throughout every session but Q3.

However, Verstappen could not get off the line as the lights went green and tumbled well down the order, allowing Stroll and the P3-starting Sergio Perez to scamper off into a commanding lead.

While things were bad for Max, they were disastrous for Esteban Ocon and Valtteri Bottas. Daniel Ricciardo tagged his Renault teammate while trying to avoid the fast-starting Hamilton sending Ocon spinning. Bottas, behind, copied the Frenchman and pirouetted his W11 without any contact sending both men to the back.

Although things couldn’t have gone any better for Racing Point, the first lap star was undoubtedly their future driver, Sebastian Vettel. The German began the race in 11th but was in third place after just one lap. Seb was finally finding the benefits of his high downforce Ferrari SF1000 in the inclement conditions.

But while Vettel was settling back into top-three life, it was the other Prancing Horse of Charles Leclerc that drew everyone’s attention. The Monegasque was the first man to swap from full wet tires to the intermediates on lap 7. He immediately benefited and set purple sectors shortly after, triggering every other driver to dive into the pits over the following laps.

Although the pitstops were important for pace, it was the virtual safety car that emerged shortly after that changed the course of the race. Antonio Giovinazzi’s gearbox gave up on him, and the Italian’s stranded Alfa Romeo required marshalls to clear it. The grippy green-walled Pirelli’s suddenly lost all temperature thanks to the slowdown allowing Verstappen to catch up on Perez in P2 in the subsequent laps.

The Dutchman was impatient to catch Stroll to take the first place he felt he deserved. But Verstappen’s eagerness forced him to take an acute angle into turn 11, and he spun his Red Bull, flat-spotting his fresh rubber and forcing him to take a second pit-stop in seven laps, effectively wiping out any chance of victory. 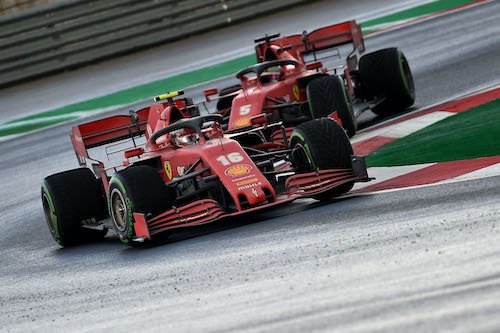 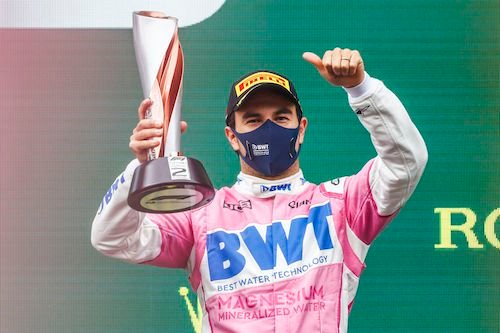 The sister Red Bull of Alex Albon was now in third and closing in on Perez, who, in turn, was catching the race leader, Stroll. With Perez reportedly a consideration to replace Albon, there seemed to be a sense of symbolism when Albon spun on his worn inters as he closed in on the Mexican. The second Red Bull was now out of race-winning contention. This further frustrated team principal Christian Horner, who desperately wants a useful number two driver to scoop up podiums and wins when Max can’t.

At the halfway point, Leclerc, again, was the miners’ canary and pitted for fresh inters on the drying track. As before, he went faster, pulling the other lead cars in for their second pit stop, with the notable exceptions of Hamilton and Perez. The decision worked wonders for Leclerc, who scythed through the order, taking Vettel and then Stroll and settled into third place. For Stroll, however, his dream day was turning into a nightmare. His new set of Pirelli’s began graining almost immediately, and he slipped back lap-by-lap after his second stop to ultimately finish a massively disappointing ninth place.

Racing Point chose to split their strategy and left Perez out on his pre-VSC inters instead. With Hamilton getting up to speed on his original set too, Checo was powerless to defend a DRS overtake from the Mercedes man but was still in second-place with Stroll now running well down the order. Hamilton, who had been faultless aside from running wide attempting to overtake Vettel earlier in the race, pulled a commanding lead over Perez, so the Mexican instead had to focus on those behind him.

Despite the threat of a downpour on the last lap, the only thing Perez had to worry about was the torrent of Ferraris, who caught up to his gearbox on the final chicane. Leclerc locked up by going off the racing line in a last-ditch attempt to take second place. As he ran wide, Vettel took P3 and desperately searched for grip out of the final corner to take second place from Perez. Checo managed to hang on, with his 48-lap old tires somehow still finding purchase on the slippy surface. He crossed the line just three-tenths ahead of Vettel, who made his first podium appearance of the season.

With Bottas firmly out of the points running thanks to his multiple spins at turn 2, Hamilton could’ve won his record-equalling seventh championship with a DNF. Instead, his masterful performance at Turkey, where he even lapped his title-rival and teammate, was emblematic of how there’s far more to his success than the car he drives.

Hamilton’s 94th career win was easily his best of this season. The final triple-header of Grands Prix that begins at Bahrain at the end of this month won’t have any championships at stake. Nonetheless, I fully expect three Lewis Hamilton victories to round off a remarkable campaign by the seven-time champ.