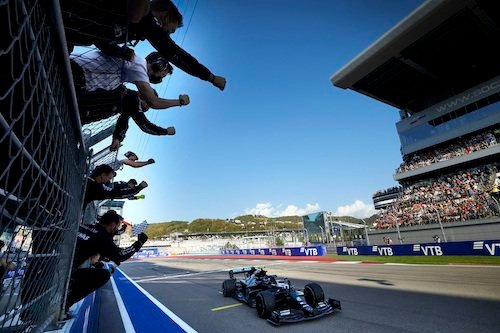 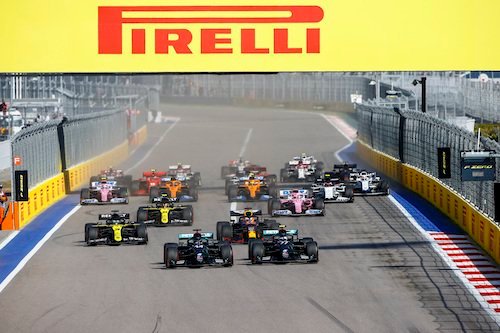 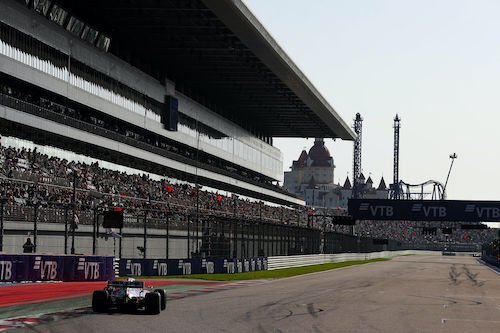 Valtteri Bottas took an overdue second win of the season at the site of his first F1 victory, Sochi. Although Bottas comfortably led without challenge when he was out front, that lead only came about because Lewis Hamilton receiving a 10second penalty for performing practice starts at a dangerous part of the pit exit ahead of the race. Bottas has struggled all year to find an answer to reigning champion and teammate Hamilton but took full advantage of the situation to bring home both first place and the fastest lap point.

The race began with Hamilton under investigation as the stewards debated whether the Briton had, in fact, broken any rules. Undeterred, Hamilton had a great getaway on the 1km run-up to the first braking zone at turn 2, fending off Bottas, who benefitted from the slipstream. Max Verstappen in the Red Bull had qualified on the front row, but the high positions are a poisoned chalice at the Sochi Autodrom without any cars to draft behind. The young Dutchman quickly lost second-place to Bottas and had a quick starting Daniel Ricciardo of the ever-improving Renault team battling too, but Verstappen managed to fend his ex-teammate off to keep third place.

Further racing for podium positions in the opening lap was prevented as the safety car made an appearance for the fourth successive race. Both Carlos Sainz and Lance Stroll, podium finishers at the Italian Grand Prix, crashed out of contention for the second race running and became the only retirements of the weekend.

Sainz missed the apex of turn two and promptly took to the designated route through the bollards to avoid a time penalty for cutting the corner. However, his approach was too tight for his McLaren, and the Spaniard decimated his front left suspension after a strong impact on the wall. Lance Stroll also found himself making contact with the track limits after Charles Leclerc tagged Stroll’s Racing Point at the exit of turn 4.

While the marshalls cleared the wreckage from both incidents, the stewards passed their verdict on Hamilton’s pre-race practice starts; 2x 5second time penalties. The pressure was now on for Hamilton to stretch a lead ahead of his rivals if he wanted to retain first place. But after having a lap time deleted in Q2 of qualifying, Hamilton was not on the optimal tire strategy and was equipped with the faster degrading soft Pirellis. Bottas and Verstappen behind him were on the medium compound. Hamilton’s early stop pushed him down the order, with most other drivers running a longer first stint. His frustration was clear from his team radio, and although Hamilton ended up a net third place once everyone had pitted, he never managed to get close enough to Verstappen to mount a challenge.

While the race for the podium was over, there was plenty of action behind the lead trio. Lando Norris, George Russell, and Alex Albon all opted to pit under the safety car, presumably looking to emulate Nico Rosberg’s 2014 Russian Grand Prix when he drove nearly the entire race on the hard compound. The three off-track friends raced hard against each other with George Russell’s Williams proving troublesome to pass thanks to its straight-line speed advantage. Russell eventually succumbed to Albon, then Norris, in their superior machinery, but the fight gave a glimpse of what he’ll be capable of when in a better car. 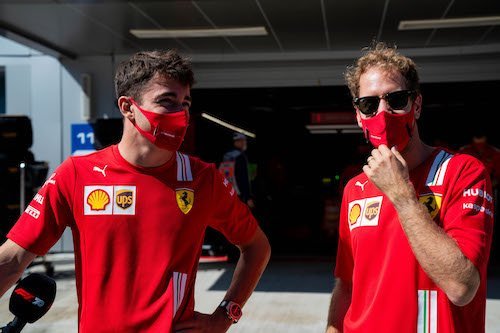 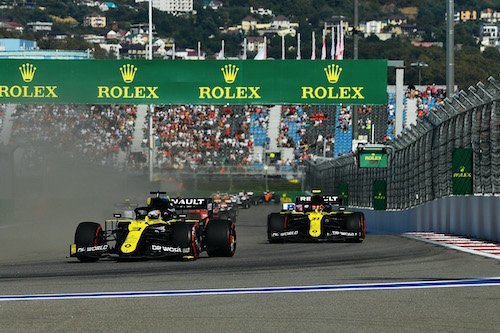 Meanwhile, Racing Point and Renault were scrapping for the best-of-the-rest title for fourth place. Despite Ricciardo’s early push for third place, he slipped behind Esteban Ocon in the sister Renault before the safety car. While Ocon settled into fourth place, Ricciardo had his mirrors full of Sergio Perez. The Mexican was, once again, showing why he’s deserving of a drive for next year. Perez overtook Ricciardo on the inside of the long left-hand turn 3. Renault reacted by bringing both their drivers in for a new set of tires. This strategy didn’t go to plan as both cars found themselves stuck behind Sebastian Vettel’s slower Ferrari. Perez pushed in clear air and took fourth-place after his pit stop.

Although it compromised Vettel’s race, his staunch defense against the Renault pair allowed Charles Leclerc in the lead Ferrari to open a gap that eventually netted sixth place for the struggling Italian team. Renault invoked team orders to allow Ricciardo past Ocon, as the Frenchman was unable to overtake Vettel. It worked well as Leclerc ultimately split the two Renaults despite starting in tenth place. Ocon’s difficult day didn’t end there either. Home driver, Daniil Kvyat, was in DRS range and pressured Estaban in the closing laps. Ocon somehow hung on, but Kvyat and AlphaTauri will be happy with the strong result, especially with Pierre Gasly taking ninth place, overtaking Alex Albon in the process.

Although the championship gap closed for the second time in three races, Hamilton still maintains a 44-point lead over Bottas. The teams now embark on a quartet of races that weren’t originally on the 2020 calendar. Whether this helps or hinders Hamilton’s march to the title remains to be seen, but a re-energized Bottas for this last half of the season would be brilliant. Formula One makes its welcome return to the Nurburgring for the Eifel Grand Prix on the 11th of November.