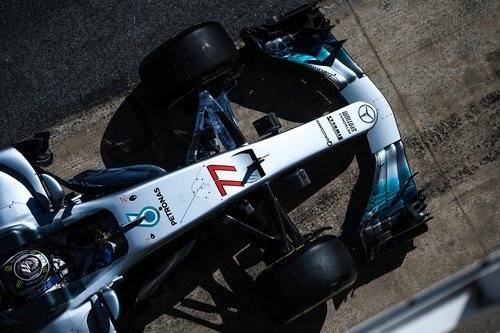 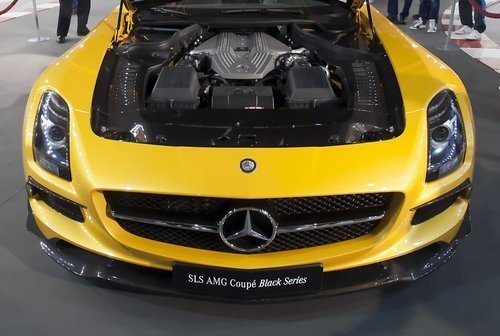 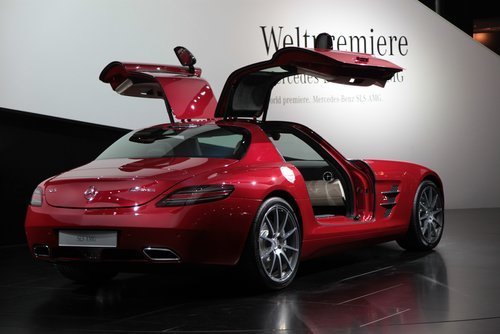 Mercedes-Benz was founded in 1926, yet the German car manufacturer can trace its history back to the turn of the 20th century. Karl Benz, an engineer by trade, created the first petrol-powered automobile in 1886. Known as the Benz Patent Motorwagen, the vehicle resembles a large tricycle more than a modern-day car. Despite the automobile’s look, Benz successfully established the automobile companies and engineers would base their future ideas on.

Mercedes-Benz can also trace its history back to Gottlieb Daimler and Wilhelm Maybach. The two converted a stagecoach into an automobile by adding a petrol engine. The duo completed their conversion in the same year that Benz created his Benz Patent Motorwagen. Although the pieces of the company were being put in place, it wasn’t until 1901 that Mercedes officially marketed their first ever car as a combined company. When the first Mercedes hit the market, the company was formally known as Daimler-Motoren-Gesellschaft (Daimler Motors Corporation or DMG).

The birth of Mercedes

The name Mercedes may conjure up images of luxury cars today. Yet, in 1902, Mercedes was the furthest name from an automobile. In fact, it was a name bestowed on newly born girls. The name originated from the Spanish word Merced, which means mercy in English. The name is given in honor of the Virgin Mary.

Austrian entrepreneur and DMG employee Emil Jellinek introduced the name when he trademarked it in 1901. The first DMG car to feature the new name was the 1901 Mercedes 35-horsepower car. The car was named after Jellinek’s daughter Mercedes Jellinek.

DMG protected the Mercedes trademark, and in 1926 with the merger of Karl Benz’s and Gottlieb Daimler’s companies, it became the official name of the company’s cars. Although the company was known as Daimler-Benz, its vehicles carried the Mercedes name. The merger between Benz and Daimler combined the two oldest automobile manufacturers in the world.

Unfortunately for the Jellinek family that created the Mercedes moniker, their future wouldn’t be so successful. Emil Jellinek, who had acquired immense wealth, was ruined during World War I. He was arrested on several occasions for allegedly spying for the Germans in France and Switzerland. He died in 1918. His daughter, for whom the Mercedes car series was originally named, died in 1929 from bone cancer. By all reports, Mercedes Jellinek had fallen into poverty during WWI. The Great War had wiped out her finances and led to her begging in the streets of Vienna, Austria. 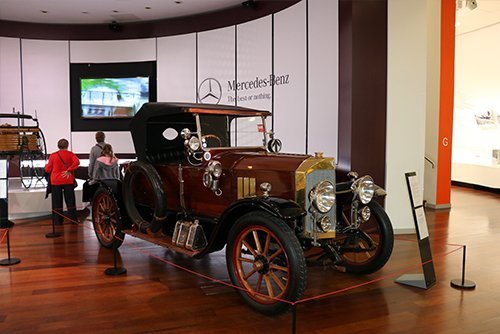 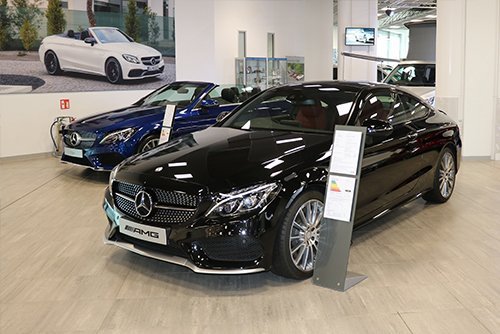 The first contemporary automobile was manufactured by DMG. It was designed by Maybach and Jellinek and it far more closely resembled the cars of today than the earlier designs. It had a low center of gravity and didn’t sit up high like previous creations. It was also lightweight for the time and contained a 35-horsepower engine.

One of the most significant changes that occurred thanks to the first Mercedes car was it put an end to the use of horse carriages in the making of automobiles. Previously, car manufacturers simply took horse-drawn carriages and transformed them into automobiles. DMG ended that practice and began building frames and chassis specifically for automobiles.

In 1909, Mercedes’ iconic three-pointed star logo was trademarked. It is the logo that is adorned on all Mercedes cars today. It remains one of the most recognizable car logos on the market. One look at it brings to mind the luxury and quality of Mercedes cars.

Like many German companies, DMG was badly affected by WWI. The combination of inflation and poor sales following the war hurt the company severely. Due to the strain and pressure put on companies, mergers were one way businesses stayed afloat post-war. Despite being competitors in the car manufacturing arena, DMG and Benz joined together in May 1924 through a joint venture.

Just over two years later, the two companies officially merged into one. The deal joined the two oldest automotive companies in the world. Daimler-Benz was born, and months later, the newly formed company showed off its new car models under the new Mercedes-Benz brand name. The first model produced by the company was the 8/38 hp two-liter car (W 02) and the 12/55 hp three-liter model (W 03). 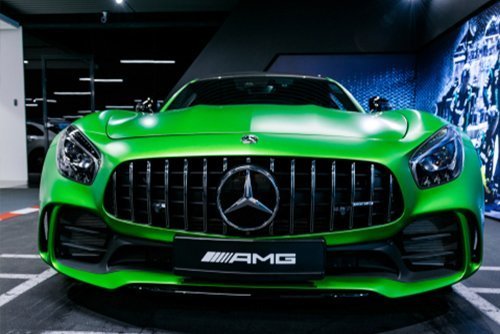 The 300 SL is considered Mercedes’ most iconic car according to company experts. Released after World War II, the 300 SL kickstarted Mercedes’ post-war success. During WWII, Mercedes had been part of the German war effort, and its cars had been popular with Adolf Hitler. The 300 SL had a powerful inline-six engine, and it was fun to drive on the open road. However, the coolest aspect of the car was the roof-hinged “Gullwing” doors. These doors weren’t added for esthetic reasons. Designers had to mount the doors on the roof due to the 300 SL’s chassis not having enough space for conventional car doors.

While Mercedes is often seen as synonymous with luxury, the company has always looked to strengthen its status in the market. In 1963, Mercedes released the 600. It was a car modeled in the vein of Rolls-Royce and Cadillac automobiles. While it wasn’t very reliable, the luxury, accessories, and gadgets inside pushed up the cost of the car. One of the innovations used in the 600 was hydraulics for the power windows. Unfortunately for Mercedes, the 600 has a long legacy of being the dictator’s choice when it came to automobiles during the era. It is a black eye on the Mercedes legacy.

The Mercedes 300 SEL 6.3 has one of the best looks of any model produced by the Daimler-Benz. It combined sports sedan style with American muscle cars power. Mercedes created the 300 SEL after journalists joked the company’s cars were dull. To excite writers, Mercedes took the 6.3-liter V8 from the 600 and put it into the smaller SEL body. The move created the fastest sedan of its time. It also created the prototype for Mercedes’ current line of AMG models.

No story about Mercedes is complete without mentioning the iconic S-class series of cars. Originally introduced in 1972, the S-class in its multiple variations since has earned the reputation of being the ultimate full-size luxury sedan. Multiple top of the line luxury features continue to make the S-class worthy of its status and has helped the car compete against more expensive offerings from competitors.

Mercedes’ AMG Performance Division’s first vehicle was the SLS Sports Car. The 6.2-liter V8 made drivers feel powerful behind the wheel as the SLS had a muscle car vibe. The coupe version added Gullwing doors as a throwback to the 300 SL of the 1950s. Mercedes also made an electric version of the car.

The AMG GT carries on from the Mercedes SLS AMG. It was built to compete with the 911 line of cars from Porsche. The GT mixes things up and takes the best parts of the SLS and expands on them. One change Mercedes made was the Gullwing doors as the vertical open doors were replaced by conventional ones.

The GT is smaller, more fuel efficient, and far more grown-up than its predecessor. The top of the line of the GT range is the AMG GTR which was nicked named “the beast of the green hell” in reference to the notorious Nurburg ring racing circuit. While the overall design of the car has been largely polarizing, pundits agree that its aggressive front grille along with the nicely crafted headlights make it’s nickname suitable. A track-focused GT3 version of the car kicks this bold look up a notch. 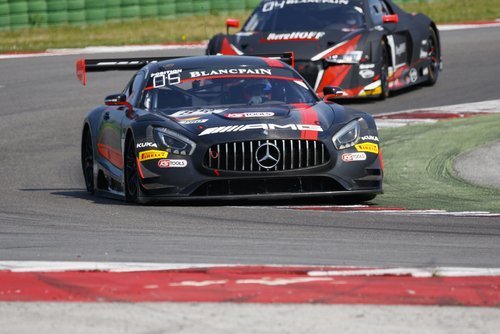 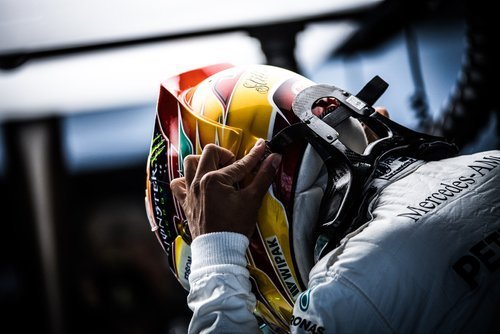 Even before Mercedes was fully formed in 1926, the companies that combined to form it had enjoyed success in motorsports. During the 1930s, however, Mercedes had little to do with racing as it concentrated solely on development, sales, and marketing.

In 1954, Mercedes took part in the Formula One World Championship. The company quickly won two championships thanks to the driving of Juan-Manuel Fangio. However, after just two years in F1, Mercedes pulled out of the competition.

The 1955 Le Mans Disaster is the event that took Mercedes out of racing for over three decades. On June 11, 1955, Mercedes participated in the 24 Hours of Le Mans race. The crash that occurred has been labeled the most catastrophic accident in motorsports history. It resulted in the death of 83 onlookers and French driver Pierre Bouillin, who drove under the name Pierre Levegh. A further 180 spectators were injured during the mishap.

The disaster occurred when Jaguar driver Mike Hawthorn cut off Austin-Healey driver Lance Macklin. Hawthorn was heading to his pit stop and cut in front of his competitor. Macklin was forced to suddenly swerve to avoid hitting Hawthorn. However, he turned into Bouillin. The French driver was moving at high speeds in an Elektron magnesium-alloy bodied Mercedes-Benz 300 SLR. Bouillin’s car collided with Macklin’s and went airborne before the Mercedes race car hit a protective dirt strip between the track and spectators at 125 miles per hour. His Mercedes car went up in flames quickly thanks to the magnesium-alloy chassis. Pieces of the burning vehicle flew into the stands. Bouillin had been thrown from the car and killed instantly when he landed on the racetrack.

Despite investigations clearing all drivers of any wrongdoing, Mercedes left motorsports at the end of 1955. The final report blamed the Circuit de la Sarthe for being too old for the speed of the cars. While reports blamed the track for not being safe enough for the cars, drivers blamed each other following the race.

In the 1990s, Mercedes once again entered motorsports. The company first worked as engine suppliers to McLaren and in 1998 found success with driver Mika Hakkinen. The Finnish driver won back to back F1 World Championships with his McLaren-Mercedes car. A nine-year drought ensued before Mercedes topped the standings in F1 once more. Lewis Hamilton and Jenson Button won back to back titles in 2008 and 2009. More recently, Mercedes has dominated F1 with Hamilton and Nico Rosberg winning the race league’s last four titles. 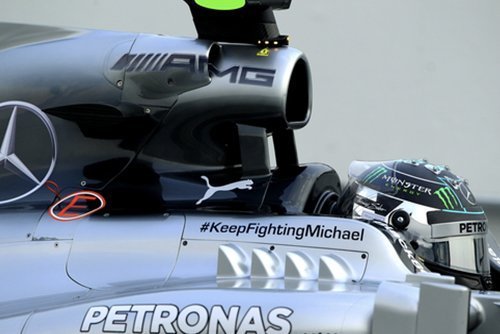 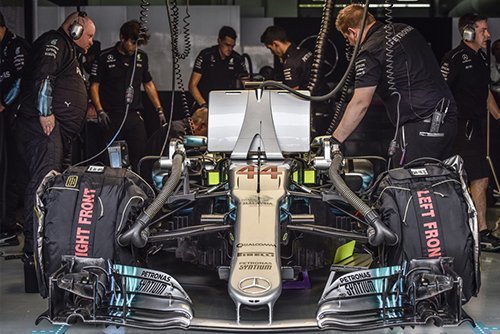 The Mercedes AMG Driving Academy is the premier driving experience for fans of the car manufacturer. The academy provides drivers with the opportunity to improve their driving skills while driving Mercedes’ line of sports automobiles. The knowledge and skills learned during the driving sessions are second to none and drivers who complete the full program will walk away ready to take on most types of racing scenarios.

The AMG Driving Academy has a list of elite Mercedes cars on offer. The AMG GT R, GT S, SL 63, CLA 45, and more are available to learners. The academy has five separate learning levels. As the academy’s website states, learners will go from “motorists to drivers” in just one day.

Located in Weybridge, England, petrol heads will find Mercedes-Benz World. The facility is home to an AMG driving experience that allows learners to enjoy the historic Brooklands motorsports racetrack. The racetrack is owned and operated by Mercedes-Benz, and its experienced instructors help participants improve their driving skills.

Mercedes-Benz World has a variety of driving experiences that include AMG instructions. There is also a G-Class experience that teaches learners the finer points of 4x4 driving. Companies can even sign up for team building and corporate events held at the facility.

Mercedes-Benz World has more to offer visitors besides driving experiences. Driving simulators allow under-17s to get behind the wheel and learn to drive. A variety of attractions are also on tap at Mercedes-Benz World including View Suspended II and 4x4 Mud Laps.

Mercedes-Benz has a long history in car manufacturing. Despite combining the world’s oldest automakers, it continues to plow forward as an innovative company. From iconic cars of the 1950s and 1960s to its modern classics, Mercedes continues to push the boundaries of luxury and quality.