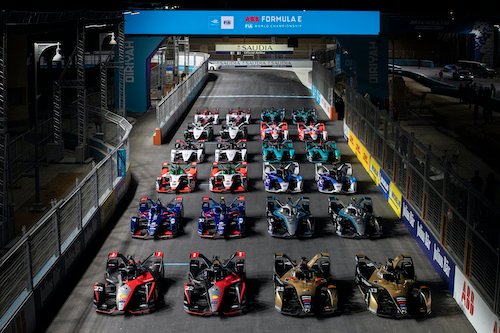 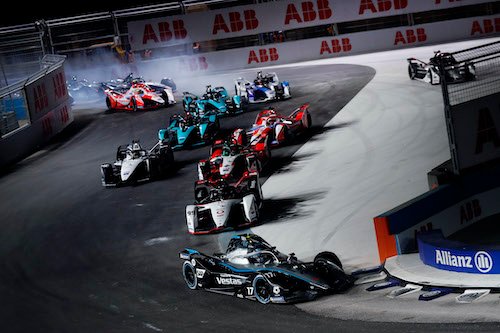 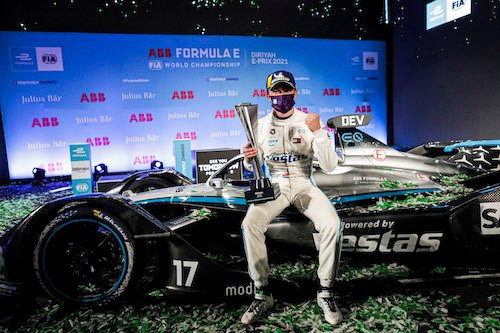 Formula E returned for season 7 in dramatic style at Diriyah. The Saudi Arabian race once again held a double-header event to kick-off the championship. And after no racing since that rather unique week in Berlin last August, there was more than enough action to make up for the electric sport's time away. Nyck de Vries and Sam Bird were the two race victors. But that barely scratches the surface of a weekend with red flags, horror crashes, disqualifications, and Patriot missiles. Yes, really.

The two ePrix took place underneath lights, marking them the first Formula E night races, and adding to the spectacle. For the first race, de Vries took pole position for his Mercedes team and got a great start to lead into the first corner. While he remained unchallenged over the following 45-minutes, fellow front-row starter, Pascal Wehrlein had a torrid evening.

The new Porsche driver may have impressed his employer in qualifying, but his weekend went downhill from there. Off the line, Wehrlein was comparatively slow. He was forced to defend the inside line from René Rast and entered turn one in a cloud of tire smoke from locking up. His early defense went to waste as Rast kept piling on the pressure, finally edging past at turn one several laps later. Wehrlein immediately pulled to the outside of turn two to benefit from attack mode, but he could not stay close.

Behind him, Swiss driver, Edoardo Mortara, lost a position as he jinked into the attack mode detection zone to begin the start of what may be the best overtake you'll see this year. With Wehrlein's attack mode drained, his Porsche was slowing down fourth-placed Mitch Evans behind him, with Mortara stalking both. Thanks to the power output advantage of Mortara, he eased alongside to the right of Evans's Jaguar only to be faced with the rear wing of Wehrlain. Undeterred, Mortara's kept his Venturi flat out and snapped back to the left to pass Wehrlein, too. Millimeters would've separated the three cars as Mortara sliced through, but no damage inflicted.

The second half of the race was incident-packed seeing the safety car called out repeatedly. Sam Bird and Alex Lynn triggered the first after Lynn squeezed an optimistic Bird into the barriers, ending both mens' races. No sooner had the slowdown ended, and the safety car called out again, with Maximilian Günther hitting the barriers heavily all by himself. Rast, Mortara, and Evans fought amongst themselves in the final green flag laps dash to end, with Mortara and Evans eventually joining de Vries on the podium.

The Friday joy for Mortara did not carry through to Saturday, however. During the free practice session, his car suffered a brake failure that resulted in a high-speed impact crash. Mortara was okay but taken to hospital for scans. He would not participate in qualifying, nor start race two. The FIA stewards took the firm-but-fair decision to require a "deep analysis" of Mortara's car before allowing any Mercedes-powered team to compete. The ruling meant Nyck de Vries, Stoffel Vandoorne, and Norman Nato were all not allowed to qualify. With de Vries winning race one, and Vandoorne taking the fastest lap, this was quite the upset for Mercedes.

Nonetheless, the action up at the front of the grid for race two was unrelenting once again. Robin Frijns began in P1 and had a race-long battle with Sam Bird, who took second place from Sérgio Sette Câmara off the line. What followed was a dance of strategy and mental fortitude between Bird and Frijns. Each took spells leading the race as they allowed the other to activate attack mode, and streak past on the start/finish straight. 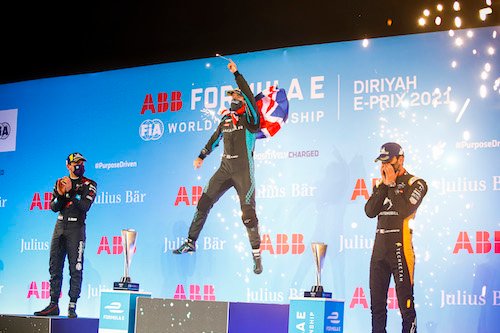 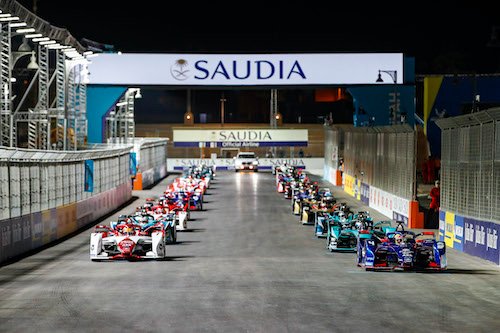 On the march behind them were the duo of DS Techeetahs. The two Formula E champions, Jean-Eric Vergne and reigning champion António Félix da Costa were racing almost in tandem to get past their rivals. They didn't take long to scythe their way through the midfield pack towards the front. Now in P3 and P4, the Techeetahs garage watched on in horror as their two drivers almost took each other out. Félix da Costa was inches from pushing teammate Vergne's car into the Tecpro barrier and ending the race for both.

Any further possibility for intra-team misconduct was taken away from the DS Techeetah pair though. A full course yellow slowed down the race, before a safety car, and then a red flag a few minutes before the clock ticked to zero. The TV cameras suggested this was thanks to Maximilian Günther taking out Tom Blomqvist in a fairly innocuous incident. After the race, however, footage emerged of a horrific smash where Alex Lynn found himself between the wall and a defending Sebastian Buemi, before flipping upside down and having his halo scraping along the tarmac at high-speed. Thankfully Lynn is okay, but the accident meant Sam Bird, who happened to be leading the Frijns-Bird battle at the time of the crash, won under the red flag.

In a stranger than fiction story, too, the chaos and carnage of the races were almost secondary news. With the crashes creating noise on track, there were explosions in the sky above, too. The Saudis had to deploy a Patriot missile to intercept a missile that was fired at the capital city, Riyadh, they say by the Yemeni Houthis rebel movement. Formula E will return in April for the Rome ePrix.