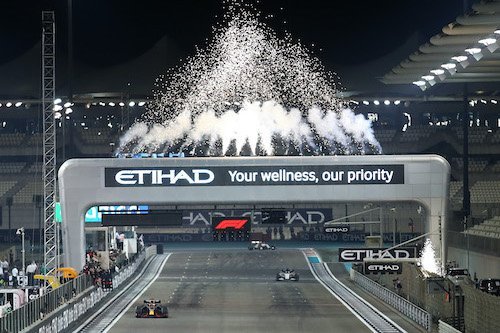 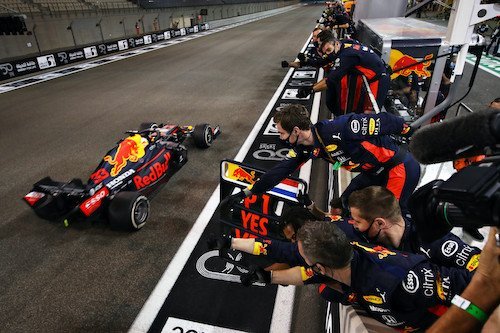 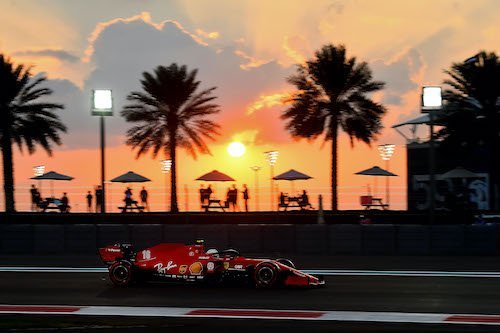 After the most grueling and unusual of F1 seasons, 2020 is over. The Yas Marina Circuit once again played host to the season finale. And once again, F1 had a rather unmemorable Abu Dhabi Grand Prix to send the sport into the off-season. The Hermann Tilke-designed venue requires single-file racing through all but two of its twenty-one corners, which again proved difficult for overtaking as Max Verstappen led a familiar top three from start to finish.

Fans rarely expect to see a barnstorming race at Yas Marina, but qualifying had raised some hope on Saturday. Verstappen took the first non-Mercedes powered pole position of the year. The Dutchman’s team radio and his mechanics’ reactions were a wonderful reminder that taking P1 on the grid is an achievement, rather than an inconvenient formality on your way to a win, as it seems for Mercedes.

The HAM-BOT-VER combination partnered up, once more, with Lewis Hamilton returning after his week out with COVID-19. But Hamilton trailed Verstappen and teammate Valtteri Bottas throughout the weekend. He started the race on the second row behind both. Usually, an out of place Hamilton (and what a compliment that is when the second row seems out of place) sees the Brit snapping at the heels of those ahead. A nicely set chessboard for the race, this seemed.

But any hope that Red Bull only had single-lap pace, meaning they would have to fend off a two-pronged Merc fight, quickly dissipated. Max was well out of DRS range by lap three. Verstappen tore ahead to create a gap as he has seen his black-liveried rivals do so often this season. Mercedes, it seemed, were becoming victim to their own game plan.

The opening lap was unusually clean, with all 20 drivers staying on track. There didn’t even appear to be a banging of wheels or a clipping of front wings. Pietro Fittipaldi, in his second race deputizing for Roman Grosjean, did lock up in a cloud of tire smoke into turn one. His more experienced peers drove around the Brazilian without any drama, though. In a season where the safety car has enjoyed so many outings, seeing a twenty-strong train of cars snake down the back straight in the early laps felt somewhat novel.

Out front, Max Verstappen extended his lead over Valtteri Bottas, who in turn grew the gap to Lewis Hamilton. Lando Norris maintained a superb P4 from qualifying and drove his McLaren hard to keep the second Red Bull of Alex Albon in his rearview mirrors. But Albon didn’t take too long to dispatch Norris and took fourth place on lap six, to aid Red Bull’s strategic choices for once.

Further back, with the fight for that “best of the rest” award and millions more of prize money at stake, Renault invoked team orders. Esteban Ocon gave up his tenth place for Daniel Ricciardo, allowing his departing teammate to battle Pierre Gasly. The middle of the pack was in constructor flying formation. The AlphaTauri pairing led two Renaults with two Ferraris in hot pursuit. The Racing Points sandwiched the action with Lance Stroll in seventh and Sergio Perez up in fourteenth after starting from the back.

That midfield championship battle turned on its head when the pit window opened. The Perez name tumbled down the timing screens. When the TV cameras caught up, a sluggish Racing Point trundled along the side of the road until it came to a complete stop. It was the second mechanical failure in three races in what is possibly the Mexican’s last F1 Grand Prix. Checo looked heartbroken after his success one week earlier. 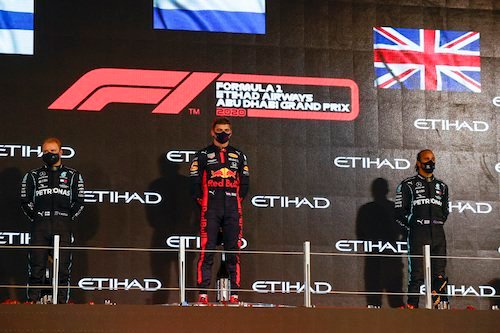 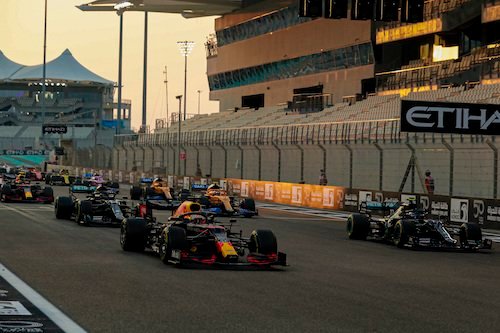 Whatever failure the Racing Point had prevented the marshalls from engaging neutral. The race director deployed a full safety car, and most teams promptly called their drivers in for pit stops. The notable exceptions were Ricciardo and both Ferraris.

With the safety car coming out at a time when most teams wanted to pit anyway, there were few possibilities to take advantage of the slowdown. Ricciardo was the big winner, who extended the life of his hard compound tires to jump into seventh. Meanwhile, Ferrari found their call to stay out was not the right one and Leclerc and Vettel both slipped down the running order.

Carlos Sainz found himself under investigation for driving unnecessarily slowly into the pits to help his McLaren team double-stack. The stewards ruled in favor of the Spaniard, though. Together with Norris running high, McLaren were the ones to end 2020 as the number three team.

Despite the customary fireworks as Verstappen crossed the line, the Abu Dhabi Grand Prix didn’t contain any fireworks on track. The final two-thirds of the race may have been the least entertaining laps in what has been a solid season of F1. That won’t matter to Red Bull, though. The team will go into the off-season with the satisfaction of ending Mercedes’ run of consecutive wins at Abu Dhabi. They now have the winter to figure out how to end their German opposition’s run of successive championships as well. The 2021 season starts in just 97 days.