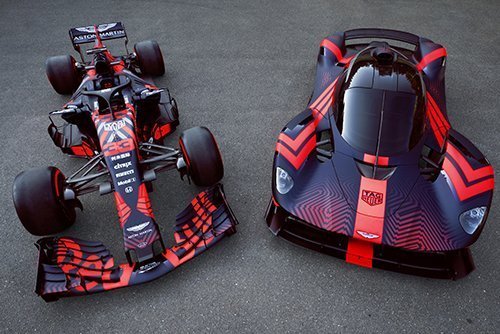 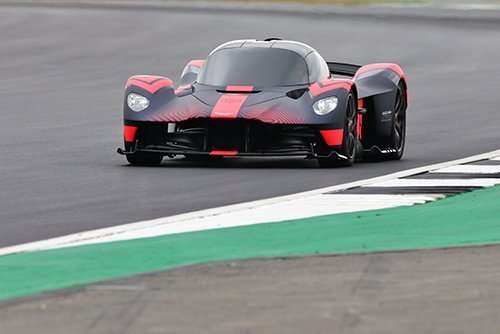 What better way to roll out a new road and race car than for a crowd of enthusiasts at one of the most famous race tracks in the world? That’s exactly what Aston Martin did with the public debut of the Valkyrie. Race fans at Silverstone had the opportunity to see the car take a lap around the Silverstone track prior to the 2019 British Grand Prix.

As previously announced, the car will be built in two versions – one for the street and one strictly for racing. The production version will pull heavily from the race car as the design process was done with the help of the Red Bull Advanced Technologies team. The result is a Formula 1 inspired hybrid street-legal limited edition production car.

The Valkyrie is a hybrid car featuring a naturally aspirated 6.5-liter V-12 engine at its core. The V-12 works along with an electric motor and state-of-the-art hybrid powertrain that provides power to the rear wheels. The result is 1,160 horsepower at 10,500 rpm pulled together with a 7-speed paddle-shift transmission. The Valkyrie can accelerate from 0 to 60 mph in 2.5 seconds.

Aston Martin says that the use of a state-of-the-art kinetic-energy-recovery system (KERS) is the key as it supplies an additional power boost. This technology comes directly from Formula 1 cars..

The racing connection is present as the track version of the car will compete in FIA endurance races, but much of the technology crosses over as both uses were in mind when designing the car. Aerodynamics can be adjusted on the fly by the driver to improve downforce. The front end has an impressive look with a low intake, flowing front and high wheel wells that give the car a distinctive look as if it’s ready for speed trials on the salt flats.

The Valkyrie features improved traction control, electronic stability program, and braking systems. It makes contact with the road with high-performance Sport Cup 2 tires sized 265/35-ZR20 at the front and 325/30-ZR21 in the rear. The tires are mounted on lightweight magnesium alloy rims with center-locking wheel nuts.

The car’s carbon fiber body is mounted on a carbon fiber frame complete with gull-wing style doors which open to a compartment that’s snug – you guessed it – like a race car. The steering wheel is something that Formula 1 and Indy Car fans will recognize instantly. The wheel, shaped like a rectangular controller, is loaded with all of the buttons you would expect to use to drive such a vehicle. Mirrors are replaced with monitors, and each seat is individually molded to the owner’s body.

Aston Martin wanted the Valkyrie to bridge the racing world with a high-end limited production consumer market, and they may have done so more than any other maker. The direct collaboration with Red Bull’s Formula 1 design group shows in nearly every aspect of the car.