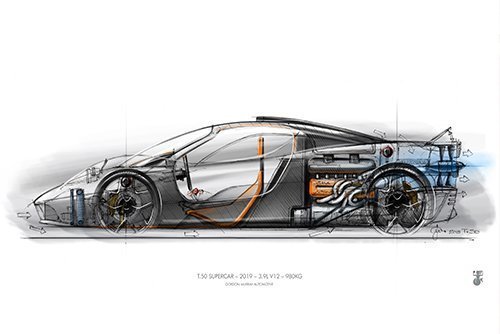 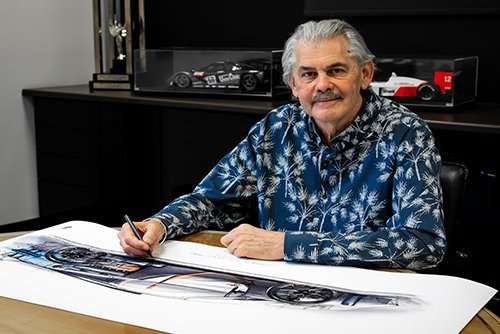 Gordon Murray is famous for contributing to the design of various Formula 1 cars, but to supercar enthusiasts, he’s best known as the brains behind McLaren F1 and the Mercedes-Benz SLR McLaren. After leaving McLaren in 2005, Murray went on to design cars such as the T.25.

With the launching of Gordon Murray Automotive in 2017, Murray’s team is now in the process of developing what many are calling the true successor to the McLaren F1, the T.50. According to the information available, the T.50 will feature an all-new V12 powerplant set up in a mid-engine rear-wheel drive design.

The T.50 is still in the design process, but the company expects to be in full production and delivering by 2022. The announced production number is set at only 100. The design team is basing the T.50 on a unique carbon fiber tub with a clear effort at minimizing the weight of every component used in the car. The overall weight is expected to be just over 2000 pounds.

Under the hood will be a Cosworth Powertrain designed all-new 3.9-liter naturally aspirated V12 engine. The engine will feature 3,980cc of displacement pushing 650 hp and 450Nm of maximum torque. With maximum engine revs of 12,100 rpm, the T.50 will have the highest-revving road car engine with no flywheel featuring a lightweight clutch and an H-pattern gearbox. With that kind of power, you would think that GMA would tout possible speeds. However, the team members are concentrating their efforts elsewhere.

“I have absolutely no interest in chasing records for top speed or acceleration. Our focus is instead on delivering the purest, most rewarding driving experience of any supercar ever built – but, rest assured, it will be quick.”

Murray and his team hope to bring 100 T.50 owners an exceptional driving experience facilitated by his years of car design and development experience. The intent is to produce the “lightest, most driver-focused supercar ever built” all done while setting new standards for supercar comfort and safety. There will also be an effort to improve “practicality” for the driver, along with two passengers (with a similar three-seat configuration pioneered by Murray in the F1), which is something not often seen in supercars.

The exterior of the car currently has the look of a modern aero sleek vehicle with plenty of downforce features with a full-width diffuser and underbody airflow that’s fan-assisted. There’s a noticeable lack of large scoops and sweeping spoilers. According to Murray, the T.50 features the most advanced aerodynamics of any road car.

The focus of bringing the best in supercar technology to drivers while considering the comfort and practicability of features is a welcome combination not often seen in the supercar market. In fact, this may just be the only supercar pre-announcement that’s ever included the word “practicability” in its media notes.