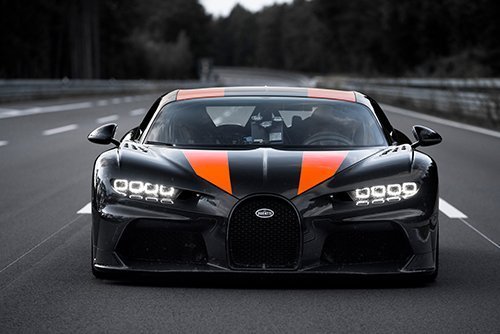 A few weeks after Bugatti set the speed record at over 300 mph, the French carmaker announced the special edition Bugatti Chiron Super Sport 300+. This car was the highlight of the brand’s 110th-anniversary celebrations, which were held in Molsheim, France. The Chiron Sport 300+ was part of the lineup of Bugatti’s most memorable models, including recent offerings such as the Centodieci, Divo, and the La Voiture Noire.

The 300+ takes its exterior look directly from the record-breaking car. Buggati revealed that only 30 units of the 300+ would be produced. With a top speed of more than 304 mph, it holds the title of “fastest production hyper sports car ever”. Additionally, it has an output of 1600hp, which is 100hp more than the Chiron.

The 300+’s body has been aerodynamically refined to help it achieve its high speed. There are Air Curtains on the front corners of the vehicle, which help to deflect pressure that builds up at the front air inlets to the sides.

Besides that, the air outlets on the wheel arch and behind the front wheels help to dissipate pressure that builds from the wheel arch, which creates a bit of negative lift at the front. This reduces the drag. There have also been modifications at the rear of the car. The 300+ uses a longtail design, which is an elongated rear end that allows laminar flow to pass over the vehicle longer to reduce the aerodynamic stall by about 40 percent.

With the modification of the tailpipe configuration, the diffuser is placed at the center of the rear to generate enough negative lift to allow the wing to stay retracted even when the car is in its Top Speed mode.

The Chiron Super Sport 300+’s body is made of exposed carbon fiber, complemented with Jet Orange racing stripes. Its engine cover and windscreen wiper are made of carbon. Just so there’s no mistaking the 300+ with a “regular” Chiron, Bugatti added a Macaron logo made of black enamel and real silver at the front. 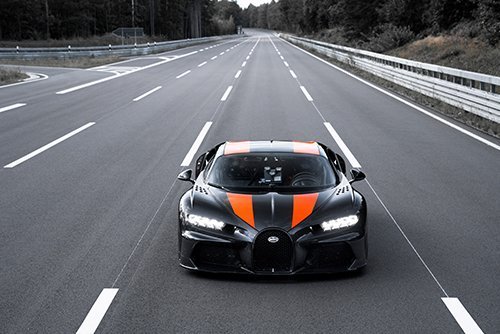 The car’s interior is mainly leather, black carbon, and Alcantara in “Beluga Black” with color highlights in Jet Orange. Its carbon door sills also feature lettering in Jet Orange as well as the knee support in the center console, and the headrests.

2019 appears to have more than its fair share of hypercars announcements, yet we get the feeling that there’s more to come.