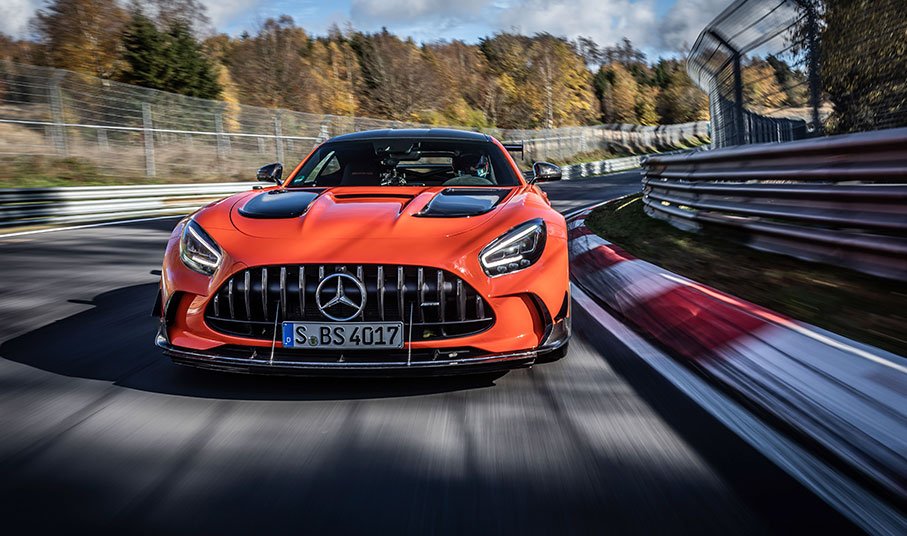 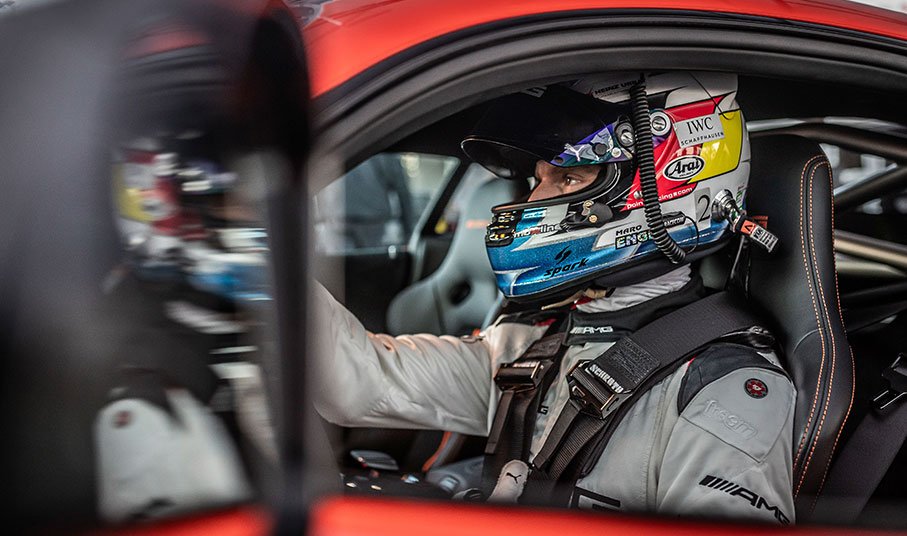 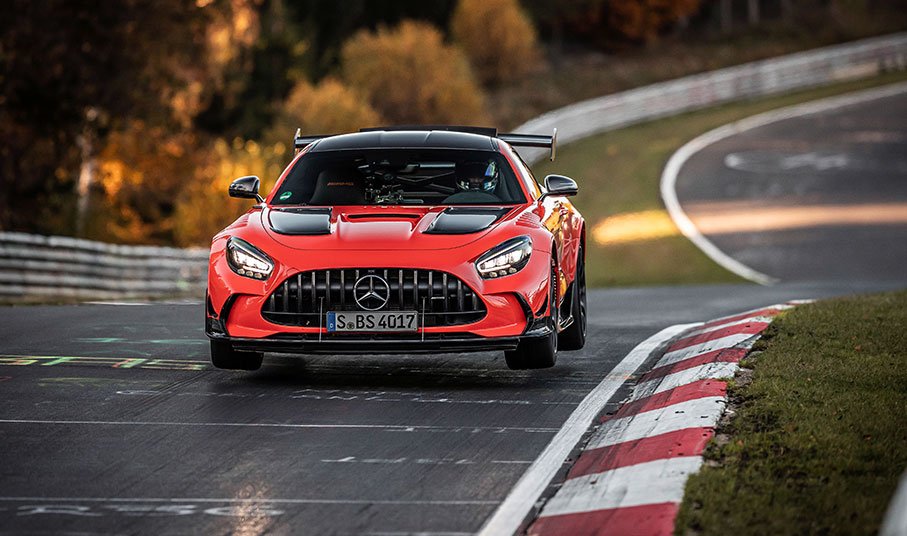 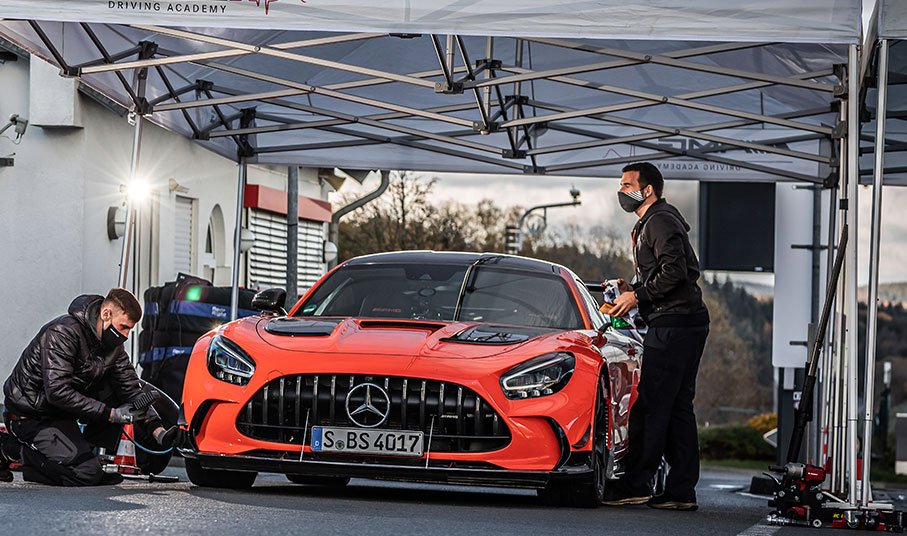 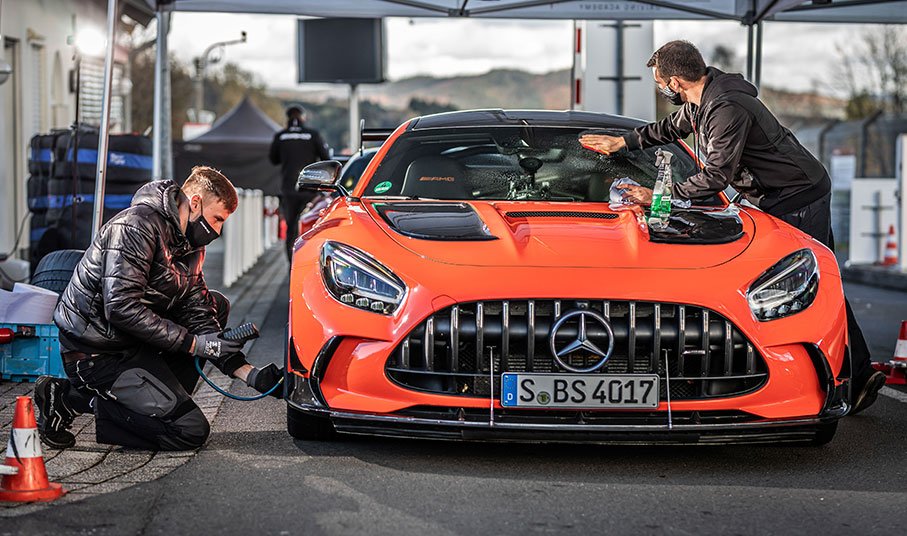 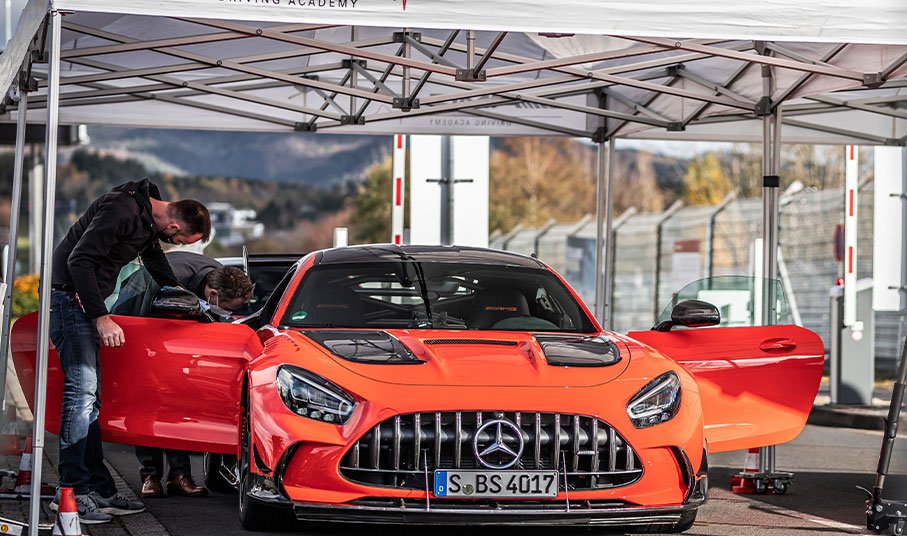 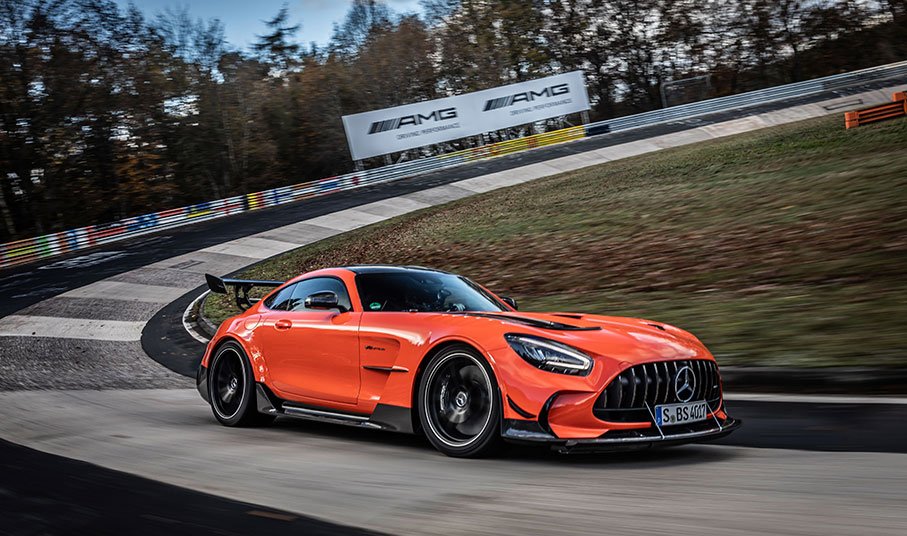 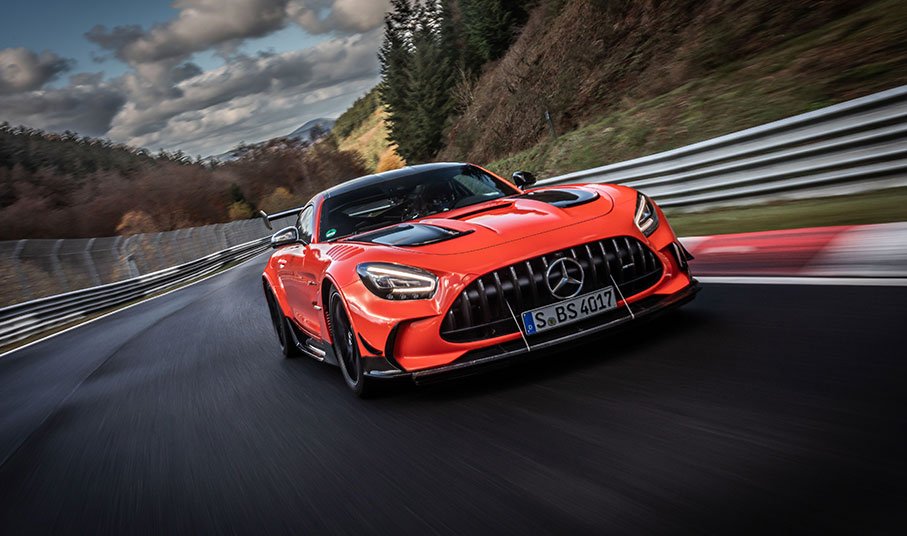 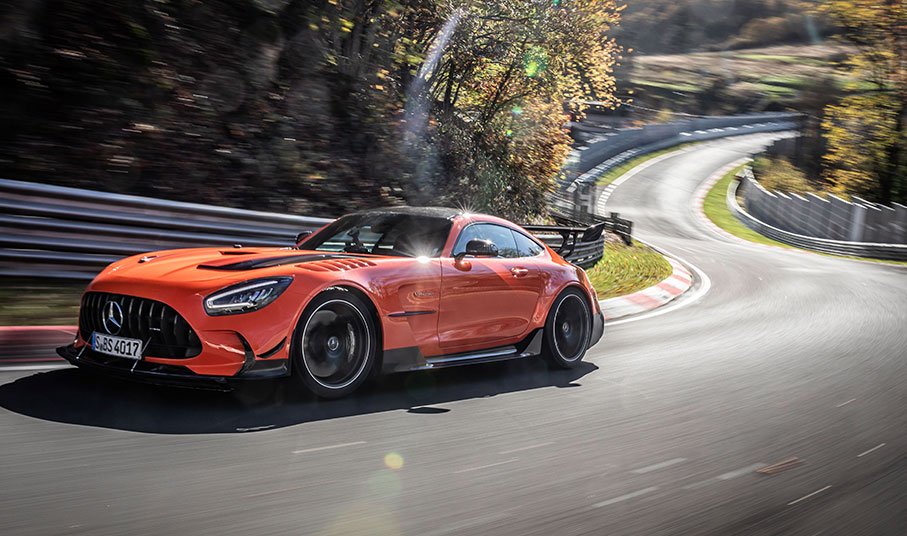 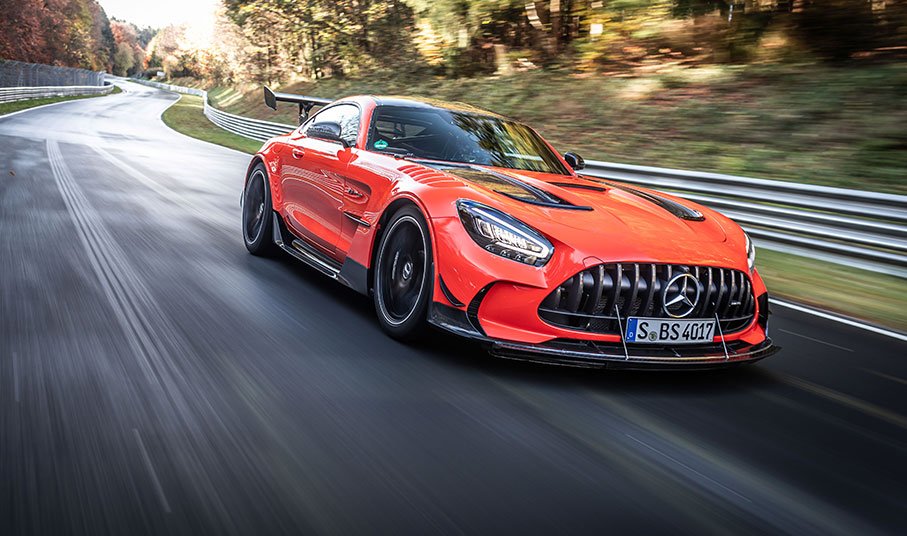 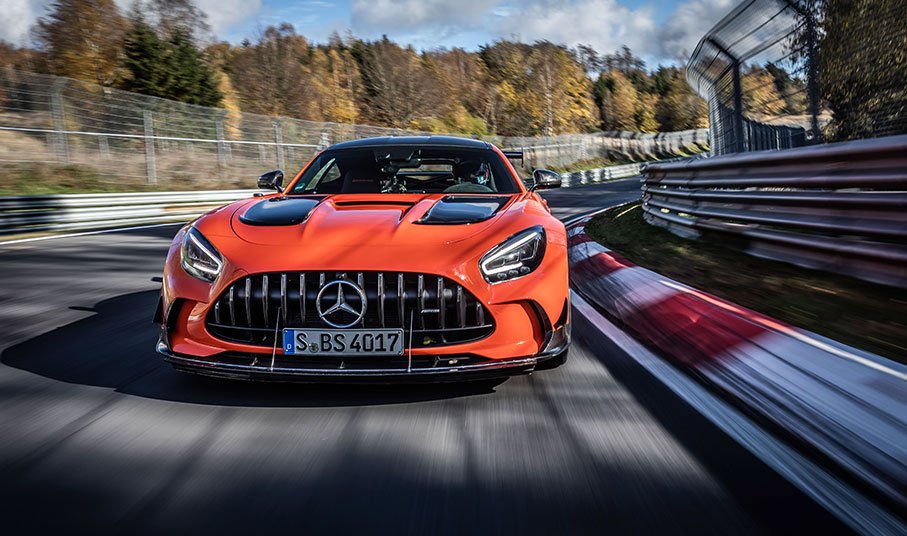 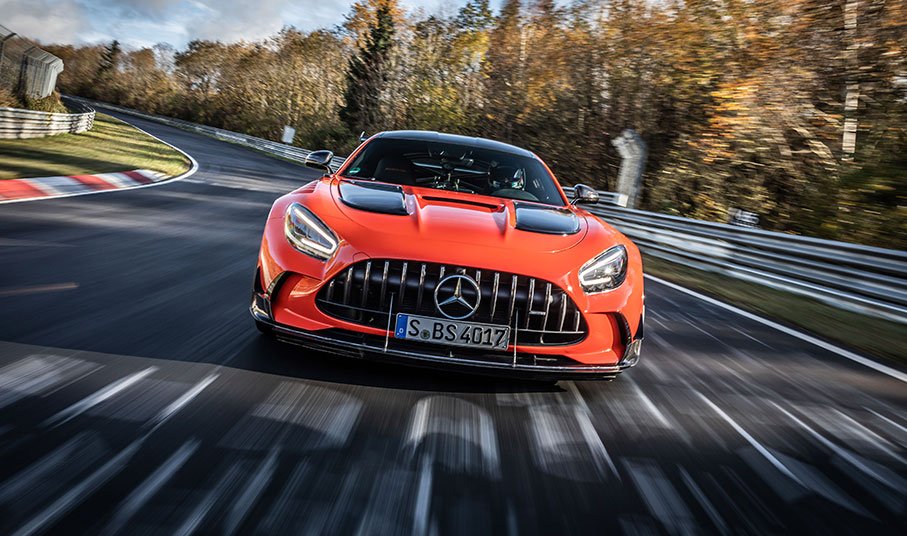 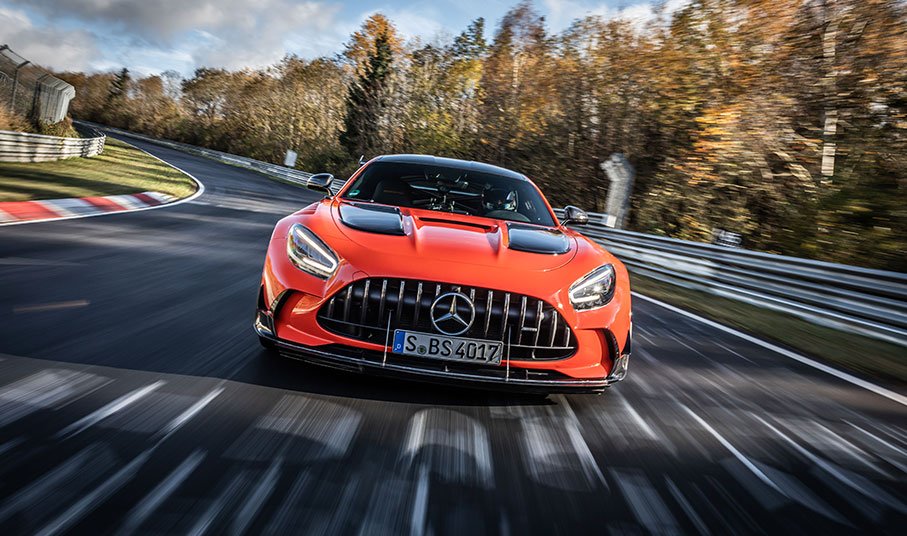 Mercedes-AMG and their GT Black Series have taken the lap record at the iconic Nürburgring Nordschleife. The Mercedes GT3 driver, Maro Engel, took the V8 monster around the German track in mixed conditions with some sections still drying. Undeterred by any water on the circuit, Engel raced around at over 300km/h on the Döttinger Höhe straight and close to 270km/h in the Kesselchen section.

The officially measured and notarised certified time stands at 6:48.047secs. This record includes the 232-meter straight at turn 13. However, the officiators record two lap times as any laps set before 2019 excluded this extra length. On the shorter lap, the previous fastest lap for a production car to tackle the hallowed 20km ribbon of tarmac was the Lamborghini Aventador SVJ. The Aventador clocked a time 1.3secs slower than the Black Series.

The only modifications allowed to the car’s set-up must also be possible on Mercedes’ production model to officially clinch the record, and the changes were numerous. Mercedes adjusted the car to run with the maximum camber values, with negative 3.8 degrees at the front and negative 3.0 on the rear axle. The mechanics placed the front carbon-fiber splitter into “race” position, with the lower and upper wing blades on the rear spoiler set to their middle setting.

AMG’s adjustable coilover suspension with adaptive damping also was set for maximum performance. Mercedes lowered it at the front by five millimeters and three millimeters at the back. These changes helped intensify the venturi effect of the front diffuser.

That downforce is also enhanced by the striking exhaust outlets on the carbon-fiber hood that dominate all front-facing shots of the GT Black Series. The warm air exiting the radiator flows directly over the car’s body, guided by the race-car design philosophy that Mercedes know so well. Combined with the rear wing, the accumulated grip of all these components made the lap record possible. Of course, the capable 4.0L V8 bi-turbo engine had something to do with it too.

Maro Engel showed that he was the right man for the job with his own adjustments. The anti-roll bars, which also feature on the production car, have three settings. Engel opted to have the hardest for the record run. He, too, had control of the traction control force throughout the lap. The AMG traction system has nine stages. Engel switched the mode of operation between position six and seven, depending on the demands of the section of track he raced through.

All of the power and aerodynamic design was matched underneath by the Michelin Pilot Sport Cup 2 R MO tires. As the only part of the car with any contact with the ground, Mercedes recognize the importance of tire selection to achieve the absolute highest adhesion. Good thing these tires are available to Black Series owners too.

Representatives of an independent notary, “wige SOLUTIONS”, were on-site to certify the car’s condition and validate the measurements. The only question left is which car will push the Black Series off the throne.