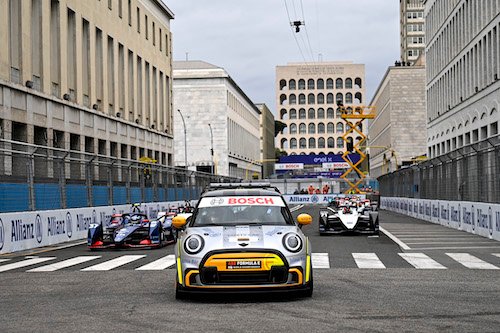 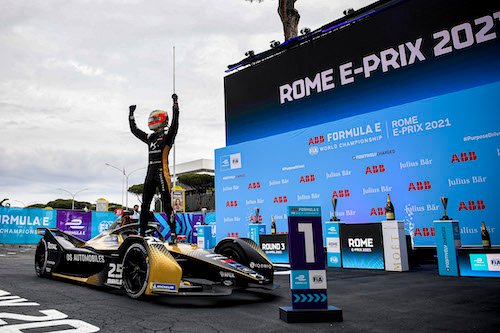 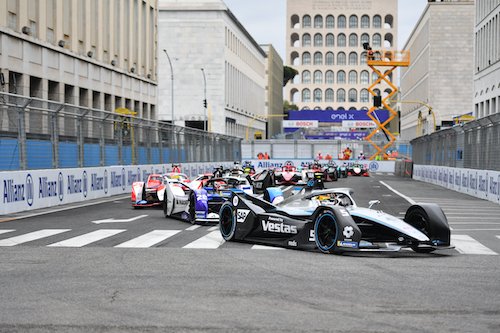 After the oddities of 2020 and the majority of Formula E's sixth season taking place at a single venue, something resembling normality resumed at Rome's ePrix. It was another double race event, just like at Saudi Arabia in February, but at a different venue. Formula E's credentials as the FIA's newest World Championship looked legitimate in Italy, and the action matched, too.

That excitement was, in part, thanks to the inclement conditions in which the 24 racers had to contend. Race 3 began behind the safety car as the officials deemed Rome's streets too wet to race on initially. But after just two laps with a half-dry/half-wet track, the first race of the weekend got underway.

Polesitter, Stoffel Vandoorne, didn't power away from the safety car as he might've hoped. André Lotterer was in hot pursuit, filling Vandoorne's mirrors in the first corners following the green flag. So much so that Lotterer made his move down the inside of turn four. But he took the Belgian driver by surprise, smashing into the left of Stoffel's Mercedes-EQ. Both drivers lost places but could continue racing, with Lotterer nursing a broken front wing for the remainder of the race.

Oliver Rowland inherited the lead after the coming together and looked comfortable despite Lucas di Grassi pushing in second place. The chasing di Grassi could be patient, though, as his team radioed in to inform the Brazilian that Rowland was under investigation. His restraint was quickly rewarded as race control slapped a drive-thru penalty on Rowland for using too much power. The severe punishment punted Rowland down to the back of the pack and out of the running.

The leaders took until half race distance before taking their first attack mode to shake up the order at the sharp end. Leader di Grassi was the last of those, a strategic mistake costing him dearly by the time he went to the detection point. The fight for the lead then became a chess battle with Jean-Eric Vergne inheriting P1. Vergne then went on the offense with his second attack mode to extend the gap. With di Grassi in check, Vergne managed to grow that gap to checkmate when di Grassi's Audi Sport had used up the second attack mode boost.

However, di Grassi wasn't done yet. Ignoring his mirrors and a charge from Sam Bird and Mitch Evans in the Jaguars behind, di Grassi lunged up the inside of Vergne to take back the lead. Despite being outmaneuvered in strategy, Lucas's racecraft deservedly put him back in first place.

But racecraft didn't get him too far as heartbreak struck. Di Grassi's driveshaft failed, forcing him to retire. As the Brazillian trundled along the side of the road looking for a place to park up his wounded Audi, he inadvertently caused carnage. With the pack running so close together, there was no space for him to get off the racing line. It fell to those behind to blast past. However, with the speed differential, di Grassi's car was unsighted, and Vandoorne's unlucky day was about to get worse.

As the Dutchman jinked right to overtake the slowing di Grassi on the outside, his Mercedes-EQ hit a bump in the road, briefly throwing him airborne. He was powerless to avoid the barriers. 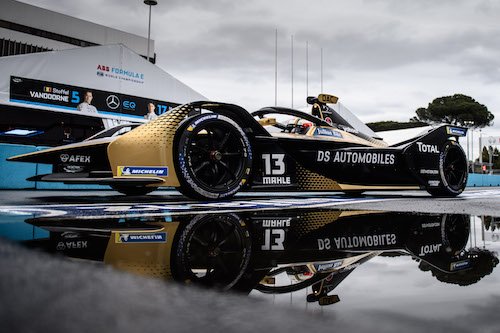 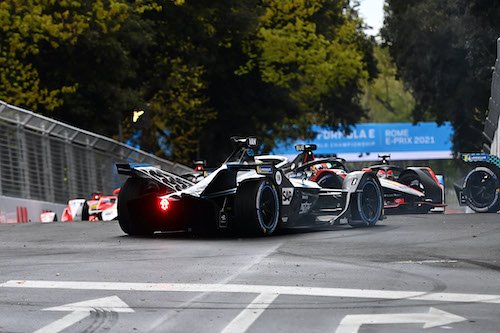 With teammate Nyck de Vries right behind and unable to drop his anchors fast enough, the two collided, ending the race for both Mercedes drivers. A full-course yellow quickly became a safety car that remained on track for the remainder of the race. And despite it all, Jean-Eric Vergne somehow was the race winner.

Any hopes that Sunday's race would be any less chaotic were dealt a blow immediately in the opening lap. The front row saw two Formula E rookies side-by-side. Nick Cassidy took pole position in only his fourth race, with Norman Nato alongside. But in a running theme of the weekend, the race leader lost out in the opening corners. Cassidy's rear brakes locked up, triggering his Envision Virgin to spin on its own accord. Cassidy was out of the lead and thrown down to P9 in one corner. The Kiwi's radio message suggesting a software issue put his brakes to full lock despite his left foot only softly touching the pedal.

Up out front, Norman Nato's inexperience was costing him. His few laps in the lead didn't last long. Pascal Wehrlein and then Stoffel Vandoorne effortlessly took places from the Venturi driver. Wehrlein with a charging move into turn four and Vandoorne performing a rare overtake at the Turn 15 hairpin. Although things were going dismally for Nato, his fellow front-row rookie's day was going worse. Cassidy's recovery drive was looking decent, but Oliver Rowland put pay to that. In his efforts to limit the places lost from triggering attack mode, Rowland looked on the inside on the following turn 16, pushing Cassidy into the barriers. A disastrous race after a dream qualifying. Rowland was later hit with a 10-second penalty for his error.

Another driver not enjoying his weekend was Lucas di Grassi. After losing from the lead after his mechanical issue in race 1, the Brazilian's race 2 untangled once again. Sebastian Buemi almost pushed di Grassi's Audi off the road in a racing incident in the downhill straight. The debris triggered a full course yellow. So it was another di Grassi incident that affected the lead. This time, though, Vandoorne won out.

With Stoffel checking his mirrors thanks to a charging Pascal Wehrlein behind him, Wehrlein's fight was halted thanks to the full-course yellow. There was further insult for Wehrlein, too, as Alexander Sims put his foot down when the green flag waved, stealing P2 from his German rival.

In an echo of the first race, the closing laps of race two saw another late safety car. This time thanks to René Rast crashing at the same spot where Vandoorne's race ended one day earlier. However, this time around, Vandoorne was leading the way. He cleverly slowed the pace down, so he only needed to defend for one lap rather than two by the time the safety car pulled in. And once he put his foot down to go, the lead was never in doubt as he made up for his misfortunes of the previous day as he became the fourth winner in Formula E's first four races.

But there was no such luck for his teammate, de Vries, who had another late-race DNF, this time crashing with Sam Bird. These closing lap incidents jumbled the championship around. Nyck de Vries's two Italian double-DNF's tumbled him down to P5 in the table while Sam Bird leaves Rome barely in the lead. This means everything is still to play for when the series races to another double race weekend at Valencia.