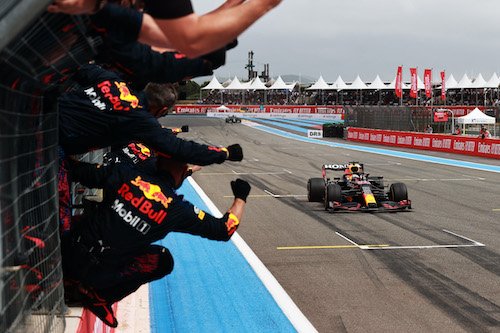 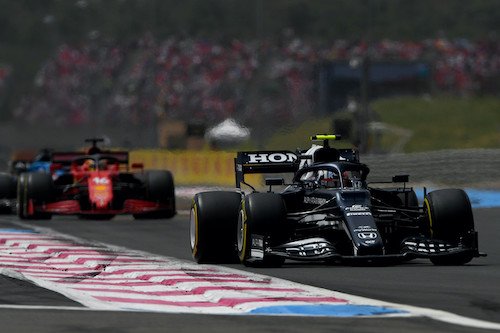 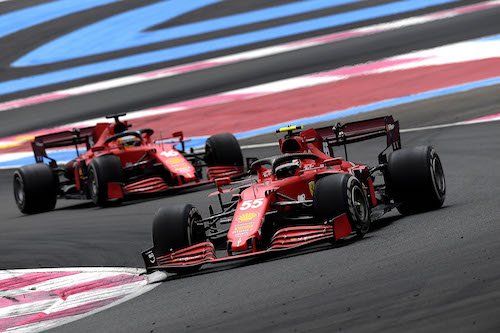 Formula One's French Grand Prix has not become a race F1 fans have looked forward to since returning to the sport in 2018. Its first two events fell short of expectations, with many disappointed that a circuit with countless possible configurations could yield such uninspiring racing. DRS trains, laps of inaction, and lack of overtaking are criticisms thrown at the racing that the Paul Ricard circuit has offered up. Enter the 2021 French Grand Prix to strip away all of that flak as Formula One put on a lights-to-flag race that captivated throughout.

Max Verstappen picked up the race victory, his third this season, to extend his championship lead. The Dutchman started from pole position, but his win was thanks to strategy and speed. This race was the complete opposite of a winner cruising to the finish line. Mercedes and Red Bull played a fascinating chess game throughout the afternoon, leaving fans guessing at the race winner until the final laps.

Verstappen made things harder than necessary after a solid start off the line. His Red Bull easily held the lead into the first corner, but a snap of its rear end sent Max wide. Verstappen's title rival, Lewis Hamilton, needed no further invitation to relieve the Dutchman of his lead and promptly swept past. Hamilton's Mercedes teammate, Valtteri Bottas, also sniffed at the opportunity, but Verstappen clung on to P2.

With Sergio Perez fresh from his first Red Bull win running in a stable fourth place, both big teams had all their weapons out front. For much of the 2021 season, we've seen either Mercedes or Red Bull holding the strategic advantage with two cars vs. one, but not in Le Castellet. From the opening laps, it was clear the race's winner would be helped by the quick thinking of the engineers back at base.

It wasn't just the frontrunners battling in this French Grand Prix, either. The midfield fight made for equally fine viewing, somewhat helped by a resurgent Daniel Ricciardo remembering how to perform his signature overtakes. The Aussie took two places at the race start with a brave move around the outside of T1, becoming the lead McLaren as Lando Norris struggled early on. With the Ferrari pair and Pierre Gasly qualifying highly once again, the race for best of the rest was well and truly on.

While the lead four stayed in position and complaining about tire graining on the radio, the McLaren duo got to work at unraveling their rivals' races. Fernando Alonso and Charles Leclerc both succumbed to a McLaren double act. Ricciardo and then Norris pressured and passed both men in MCL35M's well set up for race conditions. "Let's f***ing go" were the words from Daniel when his race engineer informed him that Gasly was the next driver in his sights. It had taken seven rounds, but the Ricciardo many expected to see at McLaren had finally turned up. 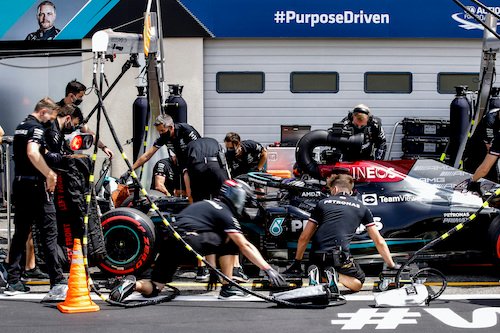 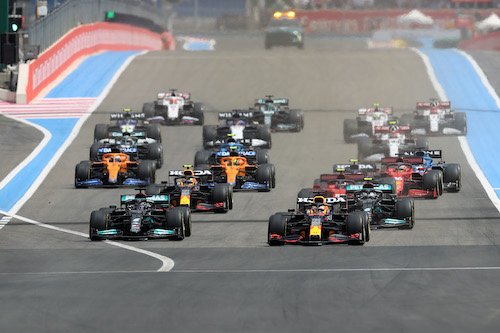 Still, things didn't go all Ricciardo's way as the power of the undercut turned the race on its head. After dispatching Leclerc earlier on, Ricciardo emerged some distance behind the Monegasque driver after his pit stop. Ferrari brought Leclerc in much earlier, and the power of fresh Pirellis was there for all to see.

Sensing an opportunity, Mercedes immediately called in Bottas, trying to jump Verstappen to gain a 1-2 lead. Red Bull responded right away, and Max kept his edge on the Finnish driver leaving the Silver Arrows needing to bring in race leader, Hamilton. However, while the move didn't work for Bottas, it did for Verstappen. Max regained the net lead from his British adversary, and the race for the win was on.

Throwing a spanner in the works for Mercedes was the second Red Bull of Sergio Perez, now in P1 but still needing to pit. The Mexican going long into the race would bring benefits in the closing stages with younger rubber to close in on the podium places. The importance of the grip of the drivers' tires became increasingly important from the team radio broadcasts. Verstappen suggested his Pirellis would run out of life if Hamilton continued to pressure him with the two Mercedes men echoing Max's doubts, too.

Hamilton's and Bottas's concerns fell on deaf ears, though, but Red Bull struck what would be the killer blow on Lap 33. Verstappen ducked in for a tire change and began the 20 lap hunt of his black liveried prey. Just as both Mercedes filled Max's mirrors early on, Valtteri Bottas had to check his for a pair of Red Bulls.

Perez, who had now pitted, was the first car Verstappen came across. As a true team player, Sergio darted well out the way from the sister Red Bull, who glided past. Bottas initially looked as though he would keep Verstappen at bay. But his defense broke at the chicane on the back straight, with a mistake letting Max past and sniffing a sensational win. To add insult to injury, in a similar move as his teammate Perez stole the final podium position from Bottas, too,

With a 5-second gap to reel in, Verstappen just had to catch and pass Lewis Hamilton, and the win would be his. Although Hamilton could somehow eek quick lap times from his old tires, it was not enough. As soon as Max was within DRS range, the race was over. Verstappen stormed past Hamilton down the Mistral Straight and took the lead for the third and final time of the weekend.

With some standout drives further down the field, too, including both Aston Martin's grabbing points, Fernando Alonso fighting back, and Norris climbing through the field to finish ahead of Ricciardo, there were great tales to be found everywhere. The headlines will, understandably, concentrate on Verstappen's triumph, but the 2021 French Grand Prix was a classic F1 race; no safety cars, no red flags, and not even any retirements necessary. A terrific race to kick-off a triple-header of Grands Prix.