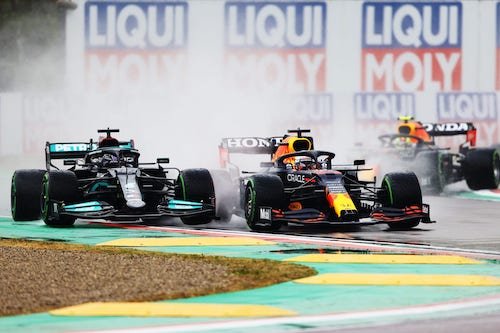 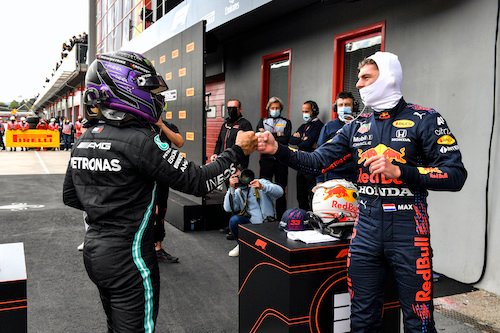 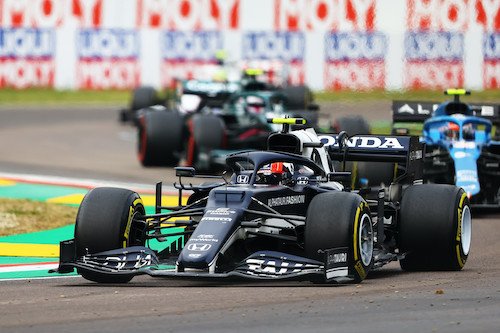 With Imola returning to the F1 calendar in 2021, I'll admit I was one of the disappointed fans. The twisty narrow track was never one where overtakes are prevalent, and even with the DRS addition in 2020, things barely improved. So color me surprised when the 2021 Emilia Romagna Grand Prix weekend served up a spectacle on both Saturday and Sunday. Max Verstappen won by 22 seconds from Lewis Hamilton, but these somewhat predictable front two finishers mask a lot of action in Italy.

As far as qualifying sessions go, we haven't seen such tightness at the front of the pack in a while. The top eight were within half a second of one another, with surprises throughout. Sergio Perez got the better of Max Verstappen in only his second race with Red Bull. Valtteri Bottas, the polesitter for 2020's Imola GP, could only summon an embarrassing eighth-place start. And Lando Norris was in contention for pole position, if not for a track limit violation. If all of 2021's Q3 sessions are like this, F1's Saturdays could become just as unmissable as Sundays!

Lewis Hamilton took his 99th P1 start, but he wasn't the leader by the first braking zone. In the damp conditions, Max Verstappen was able to demonstrate his wet weather prowess once again. The Dutchman's rocket start saw him pass the fellow Red Bull of Sergio Perez to be side-by-side with Hamilton into the Tamburello chicane.

F1's two titans gave each other approximately one millimeter of space, with Max forcing Hamilton onto the outside. It was hard and fair racing, with Hamilton needing to bounce over the yellow curbs to avoid contact after neglecting to be the first to brake. His front wing endplate was the sacrifice of that decision as an element fell from Hamilton's Mercedes. The reigning champion was fortunate to retain second place despite this but was helpless to stop Verstappen from streaking away ahead.

An early safety car swiftly halted Max's progress, however. Nicholas Latifi's Williams couldn't find any grip, spinning the Canadian off the track. Upon Latifi's rejoin, he was unaware of Nikita Mazepin's Haas behind him and tapped the Russian's front wheel before smashing into the barriers. To make Haas's weekend even rougher, Mazepin's fellow rookie teammate, Mick Schumacher, span under the safety car as he looked to warm his tires. Schumacher may not have made any records to match his legendary father yet. But I can't recall a driver being unable to enter the pits for repairs thanks to the debris of his own accident before.

Once the racing got back underway, Verstappen continued to push his advantage and grew a five-second lead in the drying conditions. While Hamilton was in hot pursuit behind, further down in the points-paying positions providing overtaking action was Pierre Gasly. But not in the way he would like. AlphaTauri took a gamble on further rain coming and kept the Frenchman out on wet tires on an ever-drying track. Gasly had qualified in P5 for the second successive race, and the baffling decision of his team might've cost him a shot at the podium. 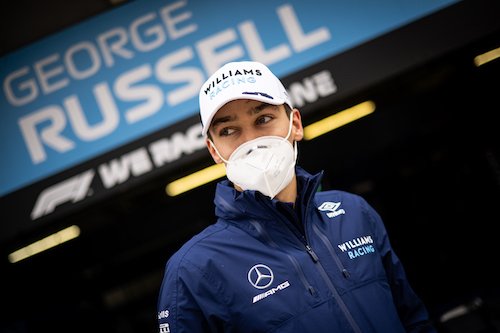 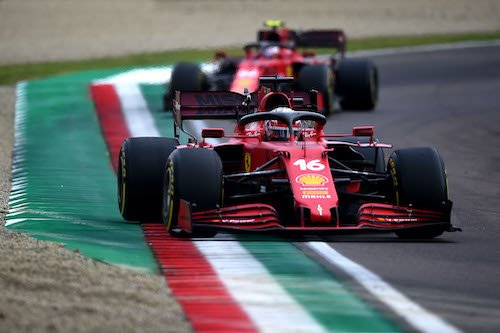 Elsewhere in the midfield, we saw a sign of intent from Lando Norris. McLaren chose to invoke team orders on their driver pairing, asking Daniel Ricciardo to allow the young Brit to pass. Lando wasted no time in opening a gap to the smiley Aussie when in front. No doubt giving McLaren and Ricciardo food for thought should they wonder who the top dog at McLaren should be.

The slow rebuild of Ferrari continued, too. Charles Leclerc epitomized the word "steady" as he started in fourth and finished in fourth at Imola. Yet Charles and his new Ferrari partner both had time off track in the challenging conditions. Carlos Sainz's engineer even going as far as to tell his driver to slow things down after repeated trips off the tarmac. That Ferrari can slip up like that but still bring a haul of points home demonstrates their progress.

Almost all the drivers spent time off track at some point on a particularly slippery Sunday. Surprisingly, though, the worst unforced error came from none other than Lewis Hamilton. In his chasing down of Verstappen for the lead, Hamilton made an uncharacteristic error when lapping George Russell and found himself in the gravel. As Lewis attempted to crawl out of his mistake, it went from bad to worse as he hit the barrier, completely ruining his front wing.

Yet his race wasn't over as George Russell then caused the second Mercedes/barrier meeting in the space of one lap. In what became the hot topic of the race, Russell found his Williams outside Valtteri Bottas's Mercedes in the turn one kink. With Bottas edging wide to take the dry line, Russell went too far to the right, hitting the grass and losing all rear grip. The Williams spun left and thumped into Bottas in a frightening 180mph crash that spewed debris everywhere.

Russell blamed Bottas, and Bottas, Russell. Valtteri happily showed George the middle finger, with the Russell retaliating with a slap on Bottas's back. A level of unprofessionalism from both men and one headache for Toto Wolff to manage. The battle for the 2022 Mercedes seat is now more intense than ever.

The resulting red flag was a lifeline for Hamilton, who was now down in 9th, but able to receive car repairs in the pit lane. When the race restarted, the inevitable Hamilton fightback was on. It was fortunate for us viewers, too, as the now dry Imola track returned to an overtaking nightmare for every non-Mercedes driver. Hamilton made the most of the sole DRS zone to edge by Lance Stroll, Daniel Ricciardo, and Carlos Sainz with relative ease. The podium places of Leclerc and Norris took a little more work, but they couldn't halt the pace advantage of the Mercedes as Hamilton took P2 at the flag.

With such a mess unfolding behind him, it's easy to overlook how comfortable Verstappen's win was. Max's victory never looked in doubt at any point, and Red Bull will travel to Portugal with confidence. The championship fight is well and truly on. 2021 could be the crowning glory of the current regulations.