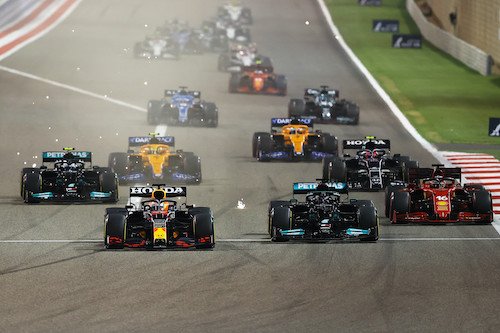 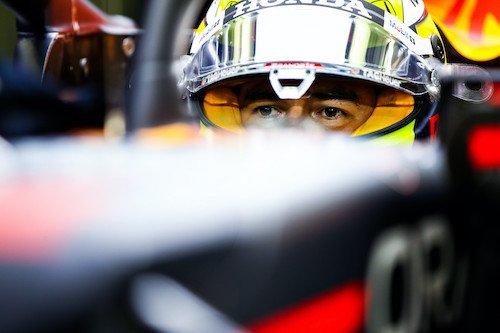 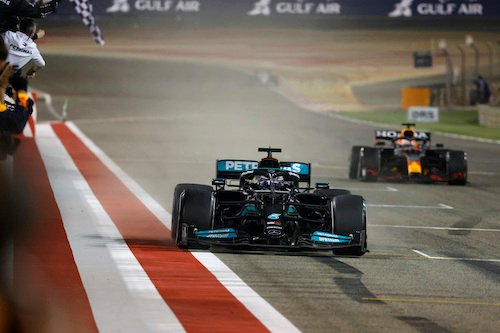 Formula One was back this weekend; and back with a bang. The season opener at Bahrain lived up to all expectations. For the first time in years, Red Bull starts the season with the fastest car on the grid. But the relentless Mercedes-Hamilton combination still took the top prize when the chequered flag fell. Despite a(nother) Lewis Hamilton victory, this season looks set to be a cracker if the 2021 Bahrain Grand Prix is anything to go by.

Red Bull's promise in the pre-season tests was no short-lived success. Max Verstappen took pole position on Saturday, and Mercedes had no answer. Things didn't go all Red Bull's way, however. Their new signing, Sergio Perez, failed to escape Q2. To compound the Mexican's issues, he suffered an engine issue on the formation lap. This problem meant Checo's Red Bull tenure began from the pit lane.

And so it was a familiar setting when the race began with Verstappen fighting alone against the two Silver Arrows. Max held his nerve off the line to keep Hamilton at bay while the sister Mercedes of Valtteri Bottas was kept busy by the resurgent Ferrari of Charles Leclerc. Behind them, the new McLaren teammates sparred, with Norris taking track position away from Daniel Ricciardo.

Any further first-lap action was promptly nullified. Nikita Mazepin, in his very first race, managed just two and a half corners before smashing his Haas into the barriers on the outside of turn three. There is seemingly something about that area of the Sakhir circuit that does not agree with Haas drivers. Thankfully there were no fireballs this time.

Verstappen didn't go full power on the restart until the very last minute following the resulting safety car. Not only did he reduce the time that Hamilton would benefit from the slipstream behind, but he also put the seven-time champion under pressure from Charles Leclerc, who had slipped past Bottas.

Much has been made of the tight midfield pack after testing. Yet fans did not expect to see Ferrari or McLaren jousting against Mercedes. As Verstappen extended his gap, Hamilton, Leclerc, Bottas, and Norris slowed each other down while jockeying for position. Bottas did slip back past Leclerc but was too far back to help Hamilton push the race-leading Red Bull. The HAM-BOT-VER top three returned to our screens, but not in the order we're used to.

A little further back and fate robbed us of the chance to see AlphaTauri's true pace this weekend. Pierre Gasly lost his front wing as he battled Daniel Ricciardo, sending him to the back of the pack. The pecking order of the chasing midfield was tough to gauge. That sentence itself is a promising sign for close fights throughout 2021. With slim margins at play, the returning two-time world champion Fernando Alonso went on the attack. The rebranded Alpine team took the honor of performing the first scheduled pit stop of 2021. The fresh tires gave Alonso the power of the undercut. He jumped past Lance Stroll and Daniel Ricciardo when they pitted in.

But it was the front runners of Hamilton and Verstappen where the undercut was most significant. Mercedes brought in Hamilton first to pressure their Austrian rivals. Surprisingly, Red Bull did not respond immediately. They instead brought in Max four laps later and thus relinquished the lead. Fresher tires for the Dutchman, but not track position. A curious decision from Christian Horner's team. 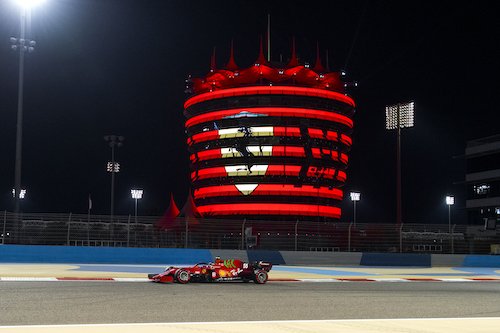 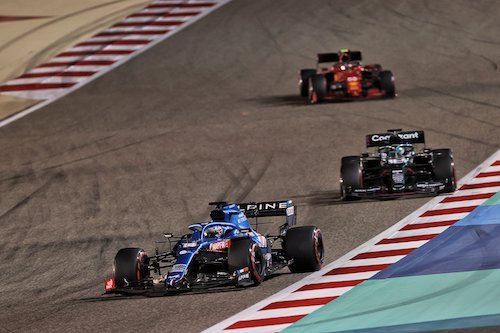 At the tail end of the points-paying positions, the aforementioned midfield fight was ablaze. Sebastian Vettel, who started from last place thanks to a penalty, went wheel-to-wheel with Fernando Alonso. Carlos Sainz watched on as his two Ferrari predecessors looked to outdo one another. The Pirelli's on Vettel's Aston Martin had already given up, though. Fernando took the position from the German with relative ease. But through all of this battling, the eventual winner was Sainz. He overtook the other two in some thrilling racing.

Vettel wasn't the only driver struggling to find grip on the hard tires. Lewis Hamilton managed just 16 laps before returning to his Mercedes garage for another set of rubber. The lesser-spotted three-stop strategy became the optimal plan. More pit stops mean more possibilities for mistakes, though. And again, Mercedes botched a Bottas pit stop in Bahrain. With Verstappen looking rapid on his final stint, edging closer and closer to Hamilton, Lewis had no rear gunner support.

Red Bull could've closed the gap instantly with a safety car. But despite Sebastian Vettel spinning Esteban Ocon around at turn one and Fernando Alonso's brakes failing, the race continued at full speed. So it was to be a pure and fair fight between Max Verstappen and Lewis Hamilton. Something we have wanted for years. And in the closing laps, we finally got it. Mostly…

Track limits had been in place at turn four during qualifying and free practice. But throughout the race, the Mercedes drivers regularly ran wide over the exit curb. The policing of the corner apparently changed between sessions. With Verstappen on the tail of Hamilton and further aided by DRS, he made his move. Hamilton defended through turn one, but by doing so he compromised his exit of turn three. The Briton quickly went for the inside line at turn four. Verstappen snatched the lead on the outside of the corner as the two went side-by-side. But by the next DRS straight, Max gave the position back on Red Bull's instruction. Despite Hamilton running wide at T4 all race, Verstappen was not to benefit from the same run-off area. Although a few laps were left, Max had used up all his tires' grip to cross the line under a second behind Hamilton but with no capability to pass.

It was a captivating battle and hugely encouraging for the other 22 races this season. Unfortunately, the conversation now turns to the stewarding that allowed Hamilton to run wide when racing alone, but not for Verstappen when dueling. This grey area of what they consider gaining an advantage needs addressing. Max can feel aggrieved by not clinching a victory that was his to take. But for us in our armchairs, after months with no racing, seeing F1 back with so much action and controversy was great to see.