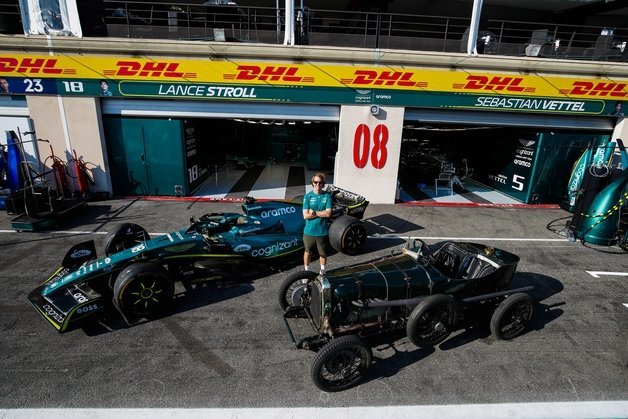 Sebastian Vettel will retire from Formula One at the end of the 2022 season. The German four-time F1 World Champion is leaving the sport at a low point in his career thanks to the underperforming Aston Martin he's found himself driving. There's a lot to unpack from the sudden-but-not-shocking announcement, including the timing of his retirement and, most crucially, who will replace him at Aston Martin for 2023.

Vettel's retirement message detailed his desire to have more family time. Seb has famously been extremely private with his non-F1 time. His avoidance of social media is well-known, at least until he created an account to upload his retirement video. Understandably, his life with three children and his wife that he doesn't get to see much has become more valuable than the racing life Vettel has lived since he was a child.

It's a shame that Vettel's time as a racer, at least in F1, will end with him being a backmarker. The pace of F1 is fierce, and he's long been sliding back through the pack, irrespective of the team he's driven for. Like his old Ferrari teammate Kimi Raikkonen, many newer fans won't remember Vettel's time as a race-winning force to be reckoned with. His F1 career will come to a close in the midfield and be a shadow of his heyday.

"Looking back is only going to slow you down. I look forward to racing down unknown tracks, and I will be finding new challenges," Sebastian said in his retirement video on social media. With that in mind, we'll skip dissecting Vettel's career-defining moments and explore the uncertaintly that's sure to fill F1 news in the next few months. Vettel's exit creates an opening for drivers looking to get into or stay in F1, and the obvious question is who will fill the gap.

It's not an easy question to answer. Aston Martin does not have a driver academy as many F1 teams do. And, unlike the Haas-Ferrari relationship, Aston Martin is not strongly affiliated with any team to have an obvious replacement waiting in the wings. Should a graduate of Formula 2 be entering Formula One soon, Aston Martin isn't where many would expect them to land.

Recent weeks have seen much speculation about Daniel Ricciardo's future with McLaren. If the rumors are true that McLaren's bosses would like to move their underwhelming signing on, it seems they'd have to buy out his contract to allow anyone else to take the 2023 seat. While McLaren is unlikely to feel so financially prosperous, they'd want to spend money paying a driver to leave, Aston Martin has the deep pockets of Lawrence Stroll's backing, who could buy out Ricciardo's contract. Why the Canadian billionaire would want to buy Ricciardo out of his contract is another question, though. The smiley Aussie's recent performance is nothing to write home about. Vettel showed at Aston Martin that even a proven race winner couldn't perform miracles in a poor car. I'd be doubtful Ricciardo could do more than Seb, given the doldrums in which Aston Martin has found themselves.

Looking elsewhere on the grid, Nicholas Latifi is unlikely to remain with a Williams team that doesn't need the sponsorship money he brings. Yet, Aston Martin needs the Latifi money even less than Williams, so that partnership seems unlikely. Fernando Alonso hasn't confirmed his future for 2023, but that'd seem like swapping one driver who peaked a decade ago with another although it's not impossible. Guanyu Zhou, Yuki Tsunoda, and Mick Schumacher are the other drivers without any long-term future in F1 that Aston Martin could look to. Yet, they aren't blockbuster signings for the team with world championship ambitions.

Looking outside of F1, Oscar Piastri is the name people constantly bring up after his successive rookie championship wins in Formula 2 and Formula 3. However, he is an Alpine driver, not a free agent, and the French manufacturer is adamant they want to keep him, but Piastri's future is pegged to Alonso's. Should the Spanish two-time champion stay at Alpine, they could look to loan Piastri to a rival like Aston Martin to get his foot in the F1 door.

The other non-F1 driver is Sauber Academy's Theo Pourchaire, currently P2 in Formula 2. The French driver is the latest protege of Alfa Romeo's Team Principal Frederic Vasseur and is another name looking to start an F1 career soon. Zhou's impressive debut in F1 has complicated matters for Vasseur, who is understood to have wanted the Chinese driver for just one season. Getting Aston Martin to take Pourchaire while Zhou gets a second season at Alfa could be an option if all parties were interested. However, the problem with choosing Pourchaire or Piastri is that Aston Martin will probably only get one-year contracts with either, which doesn't help their long-term ambitions.

There will be plenty of conversation about who might be going where in the coming weeks, if not this very weekend. If Vettel's announcement wasn't well-known in the paddock, the behind-closed-door talks between drivers' managers and high-profile team personnel will be rife in various motorhomes in Hungary. There's no clear candidate to replace Vettel, making the start of this silly season even more riveting than usual. The merry-go-round of F1 drivers is about to start, and as ever, the summer driver market will be as fun to watch as the races.