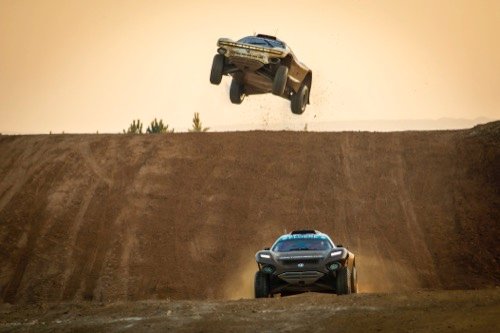 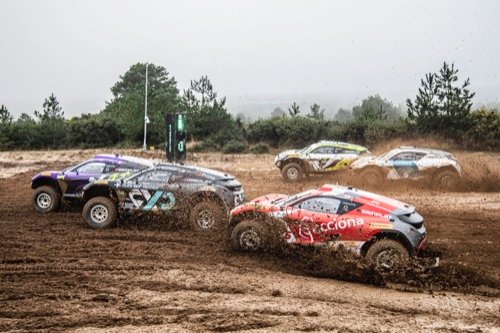 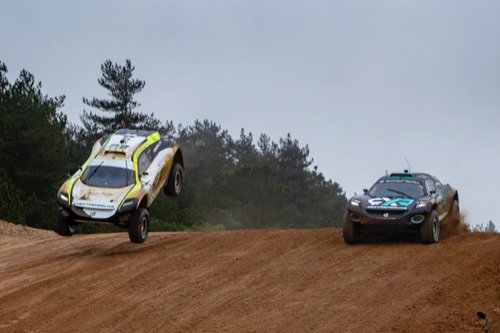 Rosberg X Racing became the inaugural Extreme E champions after securing the title of the electric off-road series on countback after X44 finally took their maiden win at the Jurassic X Prix. The Sebastian Loeb and Cristina Gutierrez combination completed a clean sweep of five qualifying successes in 2021. However, until this event on England's south coast, the podium's top step eluded them after mechanical issues and misfortune plagued the races in their campaign.

The manufacturers, Spark, brought upgrades to the ODYSSEY21 after receiving criticism over the perceived fragileness of the electric SUV. Broken suspensions, drivetrains, and broken wheels were, thankfully, absent from the season finale after being a regular part of the previous races. Together with a soft muddy surface, the strengthened parts allowed for days without terminal damage prematurely ending the races for the drivers.

Some gremlins did remain, however. X44 might've taken all 18 points from qualifying, but even the fastest team had to run out of sequence after an inverter problem arose before the first session. Carlos Sainz, too, had his door open up while setting his Q1 time for the Acciona Sainz Team. And the always-unlucky Chip Ganassi Racing had their misfortunes continue with a hydraulics issue at the end of Q2 resulting in Kyle Leduc driving off into the bushes.

Things looked like they might improve for the All-American outfit for the Crazy Race, though, at least initially. Leduc fell to last place in the race of the slowest three qualifiers, but he performed the overtake of the weekend to have a fighting chance of making the final. An early high-risk, high-reward pass around the outside of Xite Energy's Oliver Bennett allowed Leduc to close in on Andretti United's Timmy Hansen. Only a couple of seconds separated the two into the switch zone, setting up a single-lap shootout for Catie Munnings and Sara Price. The two drove hard and took different paths into the last corner, yet Munnings held on by just 0.46s to knock Ganassi out.

The two Semi-Final races saw awful visibility descend as mist filled the Jurassic X Prix's army base destination. With headlights illuminated, Kevin Hansen of JBXE out-dragged X44's Loeb into the first corner to make Semi-Final 1 a two-horse race from the off. Behind, the Veloce of newcomer Lance Woolridge made life more difficult than necessary for himself. The South African drove the wrong way to end up some ten seconds adrift after only a handful of corners.

Undeterred, Woolridge made significant gains on Loeb and Hansen to close the gap to just three seconds by the switchover. He looked like he might've even caught Loeb through Lap 2, but the Frenchman had saved his right foot for the end of his drive. Loeb pulled away from Woolridge to be on the tail of Hansen into the switch zone. His close proximity proved to be decisive as teammate Gutierrez ended up passing the JBXE through the driver change with only inches to spare. With Mikaela Ahlin-Kottulinsky taking over from Hansen but unable to overtake the X44, Loeb's push became the winning move of Semi-Final 1. 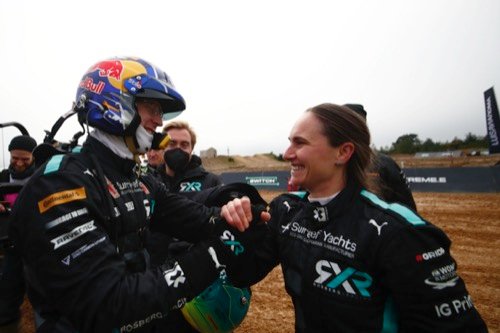 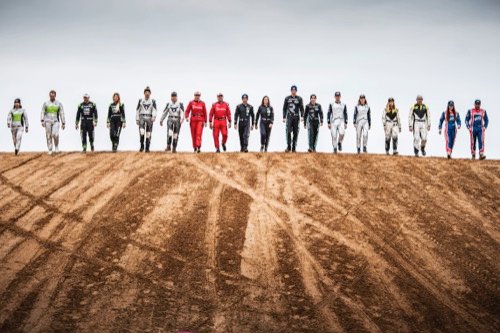 By comparison, Semi-Final 2 had little to note. Kristoffersson snatched first place into the first corner, thanks to having the inside line. It would become a lead that RXR would not give up over the following three laps. Inversely, Sainz's poor initial start left him with work to do. The Spaniard took an early hyperdrive to surge past Mattias Ekstrom for second place. Ekstrom tried to fight back in his Abt Cupra, but his own hyperdrive boost failed to assist in retaking P2. It would've been futile anyway after a nearly three-minute changeover for Abt to repair some hood damage left RXR and Acciona Sainz unchallenged to reach the final.

The five-car grid for the last race of the weekend, and the season, unsurprisingly, led to contact and aggressive racing. X44 took the center place on the grid – an inspired choice as Gutierrez took the lead with hyperdrive assistance off the line. Munnings and Ahlin-Kottulinsky fought for traction on the ultra-muddy inside line, with the JBXE just edging out the Andretti after some bodywork rubbing. Their scrapping allowed RXR to follow their championship rivals into the first corner in second-place as Taylor kept close to Gutierrez's X44.

Rosberg X Racing only needed a P4 finish and Taylor seemed to be taking no unnecessary risks with some pedestrian pace on her two laps. In a shot that will please Extreme E's media department, Ahlin-Kottulinsky literally flew past her over the course's jump to take second place from the Aussie. Sensing the RXR was there for the taking, Munnings, too, went on the attack. Copying the move that Sara Price tried on her in the earlier Crazy Race, the Andretti United driver went on the longer alternative line through the final corner to take third place.

By the end of Taylor's stint, she was so far behind P3 that Munnings even span trying to overtake the JBXE for P2, reversed back on track, and still didn't lose third place. The pressure should've been on Kristoffersson for the championship lap. But Acciona Sainz, who languished back in fifth place from the very start, had a super-slow changeover, effectively taking them out of the race. Kristoffersson only had to keep his RXR running to take the title, which he promptly did with minimal fuss.

155-points apiece for Rosberg X Racing and X44 was the final tally after five rounds. X44 could finally celebrate an X Prix win but will undoubtedly rue their mechanical problems after regularly looking the fastest team over the season. RXR won't be complaining, though, with Kristoffersson and Taylor becoming the first-ever king and queen of Extreme E for 2021.