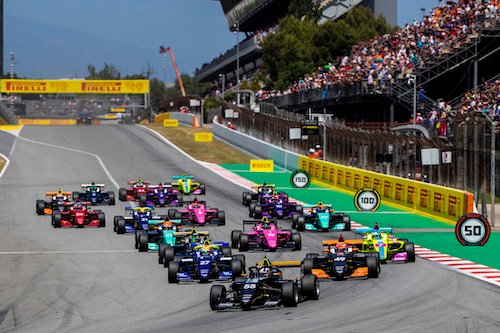 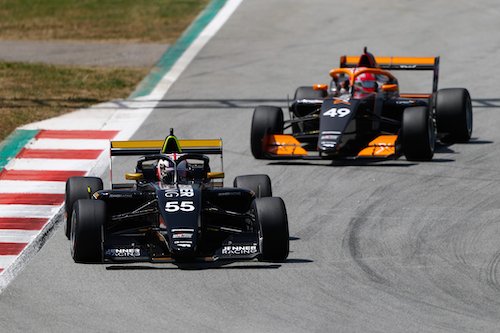 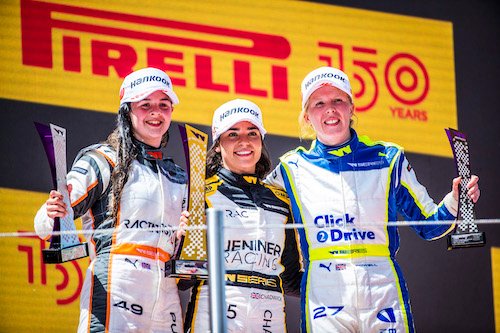 Jamie Chadwick once again was the class of the field as W Series headed to Europe after its first 'flyaway' races in Miami two weeks ago. The double-champion took her fifth successive victory in the series and third this year after leading around the Circuit de Barcelona-Catalunya from pole position.

It was a rather British affair, with the race dominated by a "will they/won't they" fight between Chadwick and fellow Brits Abbi Pulling and Alice Powell for the podium places. Ultimately the Williams Driver Academy driver won out ahead of the Alpine-backed Pulling after the teenager got the jump on her manager Powell off the line.

As is standard for any race at the Spanish circuit, the start was where most of the action took place. As such, it was all change for the top positions – aside from P1 – with Pulling and Powell swapping places and Emma Kimilainen going from P5 to P4 at the expense of Bietske Visser. The two Garcias also traded P6 and P7, with Marta Garcia getting the better of her fellow Spaniard Belen.

Pulling's start did have her briefly look like she could challenge for the lead, but she ended up settling for Powell's P2 only by going around the outside of the Turn 1 right-hander. After that, Pulling's pace was apparent as she went ahead to chase down race-leader Chadwick throughout the opening laps. The Racing X driver set lap times faster than the championship leader, but aside from keeping the gap close, she could not get a look in on the inside of any corner for a pass, although she repeatedly locked up into Turn 10.

Pulling's lock-ups had allowed Alice Powell to get closer to make it a clear leading trio, with Kimilaininen unable to match the speed of those ahead. However, with W Series running different, heavier cars for this race weekend than normal, the experienced Powell tried to manage her tires for a later lunge, so she sat in the wheel tracks of her young protege in front.

While most of the point-scoring positions seemed settled, it wasn't the same further behind. In another all-British battle, Sarah Moore sensed that she could take a point from Jess Hawkins, who sat in P10. Unlike others, Moore's Scuderia W appeared to be unaffected by the dirty air flowing off the back of Hawkins' blue Bristol Street Motors Racing car. She attempted a move into Turn 10, but she couldn't complete the pass without any DRS system in W Series to assist her.

However, the grip that Moore had on her Hancook tires kept her nosecone glued to the exhaust of Hawkins through the final sector. The proximity in the crucial last corner allowed a slipstream down the pit straight to pull alongside Hawkins. Hawkins tried to fight back, but she was powerless to stop Moore, who had inched past Turn 2's exit to grab the valuable final top ten position. 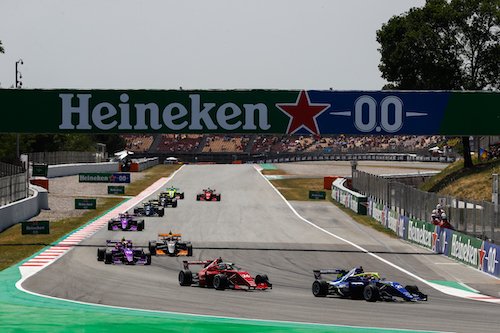 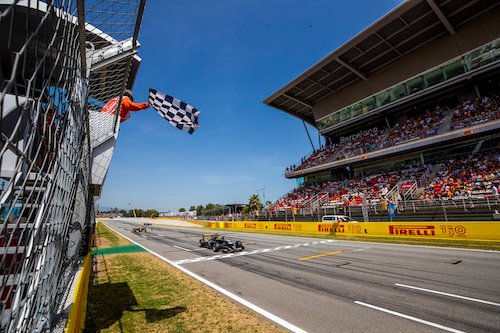 The leading three weren't the only trio of drivers racing close together. Beitske Visser's Sirin began to lose time as the 30-minute race timer ticked by. The Garcias both looked capable of overtaking Visser on their home soil, but with passing being notoriously tricky at the track, they were left hoping the Dutch driver would make a mistake. Unfortunately for them, Visser's defense was like Chadwick's out in the lead, and there was no way by.

Aside from a last-lap spin from rookie Chloe Chambers, the race finished without further incident to see Chadwick cross the line ahead of Pulling, who kept Powell at bay. Kimilainen finished in P4 after a lonely race where she wasn't as fast as the podium-finishers but far clear of Visser's P5. Marta Garcia was the highest finishing Spaniard, ahead of compatriots Belen Garcia and Nerea Marti. Fabienne Wohlwend and Sarah Moore rounded out the top ten.

Aside from the Chadwick race victory, the scorching temperature was the only thing similar between Miami and Barcelona. With the race on Saturday running under the midday sun compared to Friday's morning Practice and evening Qualifying, the track temperature was much higher, something Chadwick tried to keep on top of:

"Even though [the track temperature was] lower in Practice and Quali it was still quite high relative to the test we did here earlier in the year. Degradation is always a big thing here, so just managing that is key. Making sure that you keep it in a window – I felt like I did that for the race, and then last three laps, it turns out there wasn't much left."

"I actually felt it my [best] overtaking position was... if I got it right, I could get quite close into Turn 4. But it's a hard corner to overtake on. You have to have a very good run, so it was either T4 or... I caught her a lot into Turns 7 and 8 and then had some aero wash into Turn 9, which kind of made me struggle into T10."

Alice Powell lamented the lack of any push-to-pass system like DRS in her post-race interview before the podium and explained more in the press conference:

"Obviously, in F2 and F3, they have DRS and FRECA, which use pretty much the same cars and same chassis; they have a push-to-pass system. So, I can't see why we couldn't have it. I wanted it because we were quick enough to have won the race.

"To be honest, I kept dropping back throughout to try and save my tires and then close the gap again, but just as soon as I got close, it was physically impossible to overtake. I think with push-to-pass I would have given it a go – I would have tried it down the inside for sure."