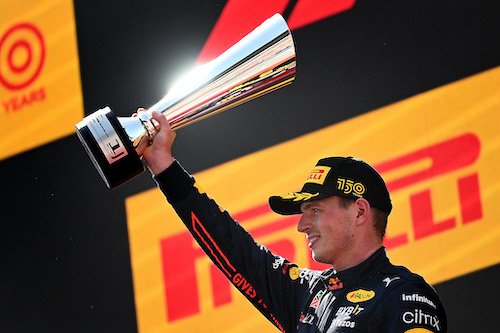 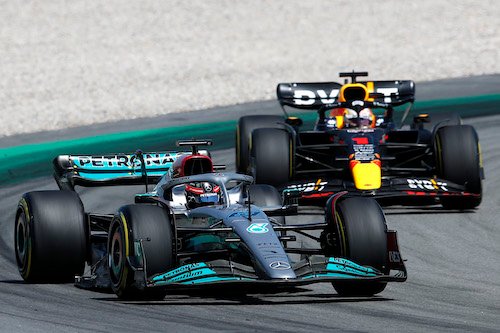 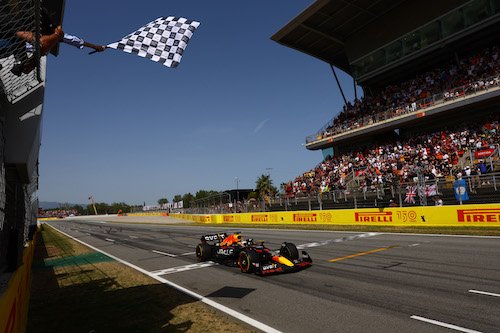 It's all changed in Formula One as Max Verstappen and Red Bull replaced Charles Leclerc and Ferrari at the top of the championship standings. In a race where everything seemed to go wrong for Ferrari, Red Bull was more than happy to pick up the pieces. However, it wasn't all smooth sailing for eventual race winner Verstappen after a trip through the gravel and technical issues with his DRS.

F1 might've left Miami behind, but the Miami heat (no, not the basketball team) followed the sport over the Atlantic to Barcelona. The Spanish sun beating down had the Grand Prix see track temperatures reach a scorching 51.2°C/124°F. As a result, tire degradation was high, and the lesser-spotted three-stop strategy proved the quickest way around the 66 laps.

As has often been the case in 2022, it was a Charles Leclerc and Max Verstappen front row, and the pair led in that order out of the first corner. Meanwhile, home hero Carlos Sainz endured another disappointing first lap after struggling to get off the line and falling back from P3 to P5. However, George Russell didn't need any excuse to put his much-improved Mercedes into third place, with Sergio Perez in hot pursuit in fourth.

Russell's teammate Lewis Hamilton didn't have such a strong start, as the Brit collided with Kevin Magnussen on the first lap. While Hamilton suffered a puncture, Magnussen slid over the Turn 4 gravel – the first car of several to do so in the race. Both pitted and fell to the back of the pack, with Hamilton soon radioing his team to request an early retirement from the race.

Turn 4 soon became a hive of activity. First, Sainz spun under braking on Lap 8 to fall off the track and into the gravel and fell to P11. Then, one lap later, Verstappen replicated the error to drop from second place to fourth. The Dutch driver's race engineer let him know it was thanks to a strong gust of wind, but the damage was already done, and he now sat behind his teammate

The order of the two Red Bulls didn't stay that way for long, though. With Perez unable to pass Russell through the opening dozen laps, the team made the call to swap positions and let their world champion have a go. However, Verstappen's task wasn't straightforward, thanks to his DRS not working correctly. On some laps, it would open wide, while on others, it would briefly move before shutting a split second later. Some exasperated radio messages between Verstappen and his pit wall didn't resolve the problem, and he couldn't make his way past the Mercedes.

The stakes of their battle for second place suddenly were raised much higher when Charles Leclerc unexpectedly began slowing down from the lead. His Ferrari suffered an engine failure, and although he limped back to the pits, Charles' day was over. Verstappen immediately pitted from what was now second place to try the undercut, and Perez was let loose on Russell once again, but this time with new tires to fight with. 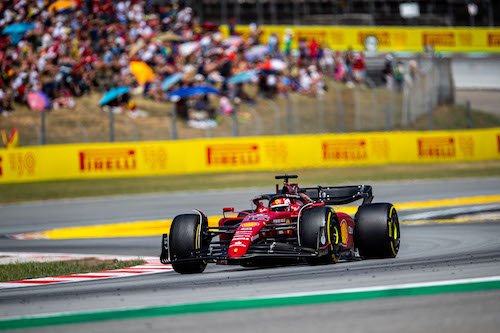 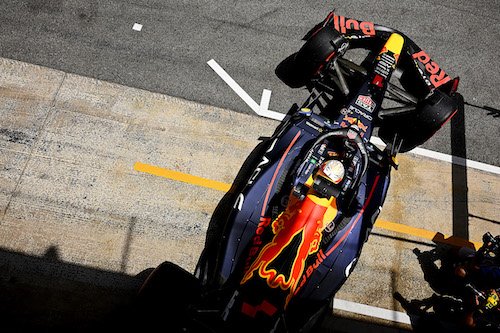 Russell couldn't defend from Perez using DRS without the problematic Red Bull of Verstappen in between them. The Mexican whizzed past to take the lead but would still need to pit at least once more to get to the end of the race. It became clear that Red Bull would win the Spanish Grand Prix, but the question remaining was "in which order?"

Further back, Sainz and Hamilton had mounted admirable comebacks to reach the midfield once again. The pair sat in P5 and P6, respectively, and had chased down Valtteri Bottas' Alfa Romeo in P4. Bottas was one of only a handful of drivers trying to nurse his Pirelli rubber home with just two pit stops and was no match for Sainz's Ferrari or Hamilton's Mercedes. First, Sainz got by with DRS assistance down the start/finish straight. Then, Hamilton went the long way around Turn 3 to have the Finnish driver drop two places in just three corners.

That wasn't enough for Hamilton, though. The Brit was showing impressive pace, and his Mercedes did what would've been impossible a few races earlier – passed a Ferrari on track. DRS helped Lewis overtake Carlos, but Russell's early defense of both Red Bulls earlier in the race showed how far the Silver Arrows have come since the opening Bahrain Grand Prix. However, the high Spanish temperatures meant Hamilton's work came undone when he had to cool his car and let the Ferrari back past in the dying laps.

Out at the front, another easy pass came for the race lead. Red Bull instructed Perez not to hold Verstappen up as the reigning champion closed in on P1 with fresher soft tires. Ever the team player, Perez conceded the place by slowing down to let Verstappen pass, giving up a possible win. The two would finish the race in that order to give Red Bull their second one-two finish in three races, while Russell came home unchallenged for third.

In just one week, Formula One heads to Monaco for the iconic race around the coastal principality. With Red Bull doing so well there over the last dozen years and Charles Leclerc still to finish a single home race, there's little stopping Max Verstappen from taking a fourth successive F1 win. The Dutch driver could be a two-time champion with races to spare now that Red Bull seem to have fixed their reliability issues.