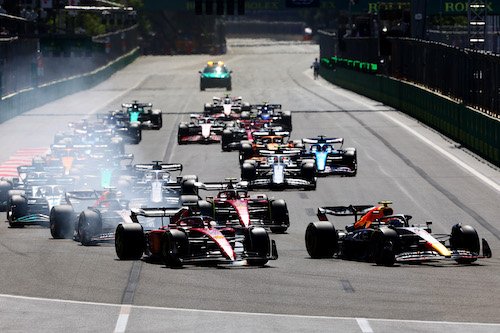 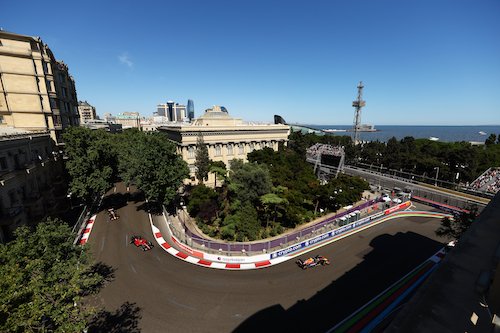 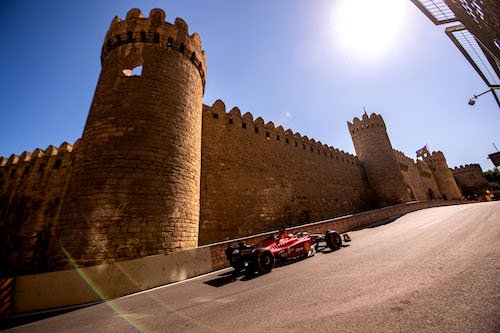 F1 World Champion Max Verstappen returned to the top step to extend his championship lead in a dominant display at the Azerbaijan Grand Prix. One year after the Dutch driver lost out on a Baku race win following a dramatic late-race tire failure, he may feel vindicated as he took the victory by over 20-seconds from second-placed Sergio Perez. The perfect day for Red Bull with a 1-2 finish was even simpler after a double failure from Ferrari cost the Italian team – and their two drivers – dearly.

Although the DNF classification was his team's fault, Charles Leclerc was solely to blame for losing the race lead from his pole position start. Fellow front-row starter Perez outraced the Monegasque driver off the line, and Leclerc instead had to fend off Verstappen, who sat in P3. Although overtaking wasn't plentiful between the leaders, Verstappen and Leclerc ran close together with the Red Bull powering down the straights, but the Ferrari fared better through the many corners on the 6km course to stay ahead.

The fourth member of the Red Bull vs. Ferrari fight in 2022 had his race end before the lap counter reached double digits. Carlos Sainz wasn't far behind Verstappen, and although he never looked like he could challenge the reigning champion, the Spaniard never had the opportunity to. His Ferrari crawled to a stop at Turn 4 of Lap 8 after a hydraulics failure meant that Sainz would go no further. His SF-75 needed a Virtual Safety Car to allow the marshals to clear it from the course.

Leclerc dived into the pits in the slowdown, looking to benefit from a 'cheap' stop. Red Bull, however, held firm and kept their pair on track, believing there would be too many laps for the hard tire to run until the end of the race. The split strategy meant that Perez and Verstappen now sat in P1 and P2, while Leclerc fell to P3 but had already made his mandatory pit stop.

Other runners behind the leaders faced the same conundrum. The Mercedes drivers and the pair of AlphaTauris in the top ten chose to pit along with Sebastian Vettel, while the Alpine duo stayed on track, matching McLaren's strategy. The split decisions created some frustration as drivers with fresh, faster rubber found themselves behind slower cars that hoped their Pirellis would go much further into the race.

Without Leclerc in between the Red Bulls, Verstappen didn't take long to cruise up to Perez once the VSC ended, and he made light work of passing his teammate. "No fighting" was the simple radio message passed onto the Mexican driver as Verstappen used DRS to slice down the inside of Turn 1. Perez did as his team told him by keeping the door open as he relinquished the lead.

With the running order now in Red Bull's preferred arrangement, the team brought in Perez and then Verstappen to pit for the hard tires. The extra few laps, they hoped, would prove pivotal in their chances to race and pass Leclerc later, as each car dropped behind the sole-remaining Ferrari during their pit stops. 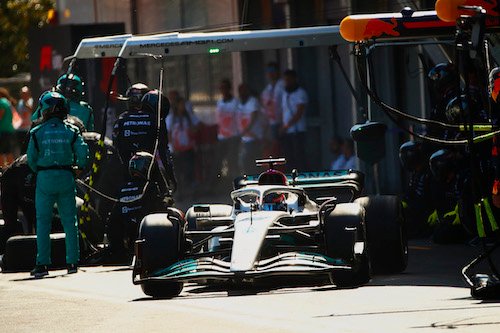 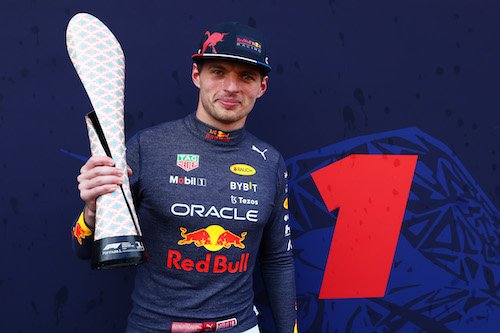 Any long-term thinking from the Red Bull pit wall soon became obsolete. Leclerc's return to P1 was short-lived, and as he rounded the final braking zone onto the 2km main straight, his Ferrari power unit blew engine smoke all over the track. Leclerc nursed his car back into the pit lane at a significantly reduced pace, but the issue was visibly terminal, and he soon joined his teammate Sainz in retiring from the race.

Red Bull's Day became much more straightforward without either Ferrari left on the track, and the Verstappen-Perez pairing just had to keep out of the walls to pick up their team's third 1-2 finish of the season. George Russell now sat in third place with a comfortable lead ahead of the midfielders behind him, who were still looking to sort out their order with a multitude of tire strategies at play.

A second VSC period helped conclude most drivers' pit stop strategies as Kevin Magnussen stopped on the circuit to become another Ferrari-powered failure in this race of attrition. Daniel Ricciardo, Valtteri Bottas, and Esteban Ocon used the slowdown to make their mandatory pit stops, while the leading trio also swapped their Pirellis. After the tire failures in 2021, those with the most to lose seemingly weren't taking any chances.

The race, unsurprisingly, finished with Verstappen leading from Perez and Russell bringing home his third P3 of the season after another consistent drive. A late push from teammate Lewis Hamilton to take P4 will restore a little pride at Mercedes, but they are still far behind the Red Bull and Ferraris, albeit without any reliability woes.

The result sees Perez overtake Leclerc in the drivers' standings to be in P2, but some 21 points behind his world champion teammate Verstappen. With no time to stop and think, the F1 circus heads to Montreal for the Canadian Grand Prix in a week. Ferrari will try to bounce back with Red Bull looking to turn the heat up further as this 2022 championship swings in the Bull's favor.