McLaren: Legendary in every way — FORTLOC

McLaren: Legendary in Every Way

McLaren. Most car enthusiasts hear that name and two words come to mind. Speed and ingenuity. McLaren is first and foremost a racing company with a rich history mostly in Formula 1. Highlights include multiple championships and some of the best drivers the racing category has ever seen. Of late, the company has come to be recognized as a very prolific exotic car manufacturer; one that can give Porsche, Lamborghini or Ferrari a run for their money. To fully appreciate the story of McLaren supercars, it’s helpful to dig into its racing history.

The name McLaren originated from its legendary founder Bruce McLaren. Born in New Zealand, Bruce was a victim of Legg-Perthes disease during his childhood. The illness left him with one leg being shorter than the other. However, it was going to take a lot more than that to slow Bruce down. Bruce grew up to become a race car driver, engineer, and inventor. He won his first Grand Prix at the age of 22. At the time, he was the youngest driver to win a Grand Prix. He subsequently had a 24 hour LeMans win in 1966 co-driving a Ford GT40 at the height of the epic LeMans battles between Ford and Ferrari.  He also had significant success in the Can-Am Series where his team dominated; winning the championship every year from 1967 to 1971. After forming his own Formula 1 team, Bruce won the Belgium Grand Prix in 1968 with a car bearing his name becoming the second person to achieve the feat.

Being passionate about different kinds of cars, Bruce nursed the ambition of building the ultimate street-legal sports car. His first and only attempt at producing a road car was the McLaren M6GT in 1969. While Bruce drove a prototype of the car every day, a few problems prevented the car from going into production. Sadly, on the 2nd of June 1970, Bruce was involved in an accident while testing his M8D Can-Am car at the Goodwood Circuit in England. To the dismay of his team members, Bruce succumbed to his injuries at the scene of the accident and passed away at the age of 32. His untimely death put an end to the plan to build 250 M6GTs every year. While the desire to make a McLaren road car didn’t die with Bruce, it took a couple of decades for the dream to materialize.

On the race track, the McLaren brand lived on long after it’s founder. From the successes in the Can-Am series, it went on to be a highly successful constructor in Formula 1. McLaren has also been home to an incredible number of legendary Formula 1 drivers. These include James Hunt, Nikki Lauder, Alan Prost and Ayrton Senna.

MP4/2 Driven by Alan Prost on display at the Porsche Museum in Stuttgart, Germany. Image:bodrumsurf/shutterstock.com

McLaren’s longest stretch of successful seasons in Formula 1 started after Ron Dennis became team principal in 1981. In the same year, McLaren raced the MP4 for the first time. Designed by John Barnard, it was the first Formula 1 car to use a monocoque built from carbon fiber composite. After gaining Porsche as an engine supplier, McLaren started a remarkable winning streak. With the MP4/2 car design and the Porsche engine, McLaren went on to win both the constructor’s and driver’s championships in 1984. Between 1984 and 1991, McLaren drivers won 7 of 8 championships, and the team took six constructor’s championships. Perhaps the most dominant season during this period was 1988. Following a switch to Honda engines, McLaren won all but one race on the Grand Prix calendar with the MP4/4 driven by Prost and Senna.

After Ayrton Senna’s championships in 1990 and 1991, McLaren faced some challenges with engine suppliers. Unsuccessful attempts at building competitive engines with Ford and Peugeot led McLaren to a partnership with Mercedes starting  from the 1995 season with the MP4/10 car.

In 2007, the duo of Fernando Alonso and Lewis Hamilton were drivers for McLaren, but the “Formula 1 Espionage Controversy” brought a dark cloud over McLaren. The episode centered around the accusations brought by Ferrari that McLaren had illegally obtained proprietary documents belonging to Ferrari. The subsequent FIA investigation resulted in multiple penalties levied against McLaren including being disqualified from the constructor’s championship for the year and an unprecedented fine of $100 million.

Despite these setbacks, Lewis Hamilton won the driver’s championship in 2008; in what was only his second year in Formula 1. The win also earned him the record of being the youngest driver to win the championship. Less than a year later, Ron Dennis relinquished his position as team principal and focused on building road cars.

The McLaren ambition to build a road car was realized in 1993 with the release of the Mclaren F1. McLaren assembled what can be described as a dream team for the project. Led by Chief Engineer Gordon Murray, it was clear that McLaren intended to take full advantage of its rich racing expertise to build the car. From painstaking modeling aimed at improving aerodynamic efficiency to Formula 1 inspired flat underbody and diffuser system for downforce improvement, there was no doubt that McLaren was serious about building an iconic road car.

Taking advantage of its pioneering efforts in making carbon fiber bodies for Formula 1 cars, the F1 was the first carbon fiber road car. Under the hood is a naturally aspirated 6.1-liter V12 BMW engine with maximum output of 627bhp helping the F1 go from 0-60mph in 3.2 seconds and a top speed of 240.1mph – a world record for a road car at the time. Most pundits agree that the F1 was an engineering marvel and it remained the fastest road car until the record was taken by the Koenigsegg CCR in 2005 or the Bugatti Veyron in 2007 depending on how you want to define a street-legal production car. Regardless, either event was more than a full decade after the introduction of the F1.

Perhaps, the most intriguing feature of the F1 is it’s centrally located driver’s seat and two passenger seats slightly behind it. The driver’s seat central location was borrowed from Formula 1 and was designed to improve visibility. 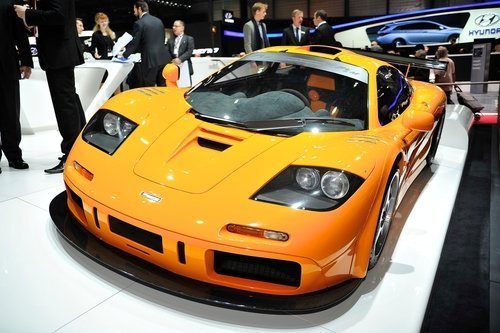 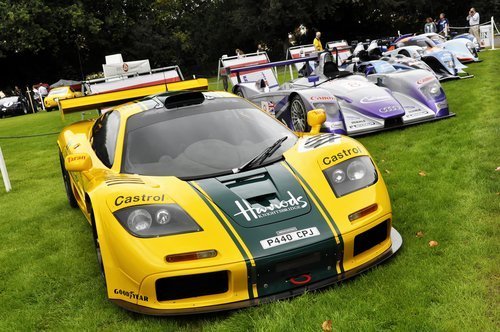 As is often done by auto manufacturers, a GT version named F1 GTR was also made. The F1 GTR went on to dominate at its debut LeMans race. It was not only the winning car but also seized the 3rd, 4th and 5th positions. In this unprecedented debut, McLaren became the first manufacturer to win at LeMans on the first ever entry.

After the F1, McLaren collaborated with Mercedes to build the SLR McLaren, but another real McLaren road car wasn’t seen until the release of the MP4 12C (later renamed as the 12C) in 2009. The 12C was equipped with a 3.8-liter twin turbo V8 engine with a maximum output of 616hp and 443lb-ft of torque. This engine helps it roar from 0 -62 mph in 3.1 seconds and a top speed of 207mph. Sharing a carbon fiber construction first seen in the F1, McLaren states that advanced fluid dynamics and extensive wind tunnel tests contributed to the final shape of the 12C.

The 12C ushered in the era of the modern McLaren sports cars with striking exterior design and minimalist interiors. This collection of road cars has been growing steadily with each iteration showing that McLaren was not only capable of going against the best but also having design brilliance to turn heads of even the most jaded of pundits.