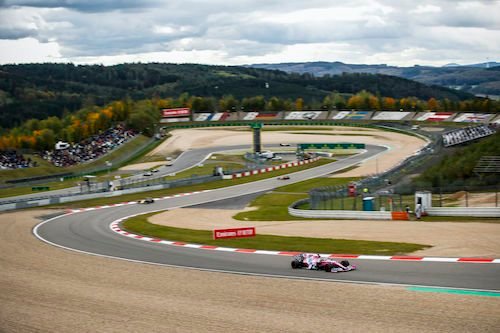 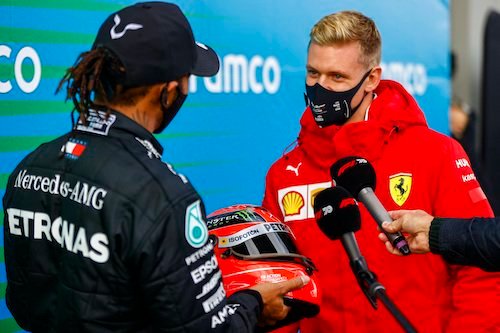 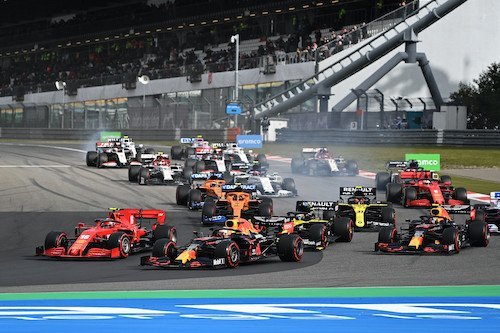 After far too long, Formula One returned to the Nürburgring for the Eifel Grand Prix. The famed circuit last hosted an event for F1 back in 2013, and although the 2020 race wasn’t an instant classic, it crammed an awful lot in for its short-lived revival. Ahead of the race itself, weather reports of rain and low temperatures generated concern for the teams. Although no rain fell during the race on Sunday, fog canceled both Friday practice sessions. The drivers had only one hour to prepare their cars for a qualifying session where Valtteri Bottas claimed pole position for the first time in six races.

Bottas started the race well, too. As the field streaked away from the starting grid, the cooler temperatures proved problematic into T1, with around half the drivers skating wide thanks to their cold tires. Bottas lost out to championship leader and teammate Lewis Hamilton in the drag race to the first corner but bravely fended off the sister Mercedes around the outside of the track. The firm but fair defense briefly put Hamilton into the clutches of third-place Max Verstappen, but the experienced Brit shrugged off the young Dutchman’s advances with ease.

While Verstappen was comfortably within reach of a podium, things weren’t looking so great for his teammate in the other Red Bull. Alex Albon had started fifth, but a huge lock-up into turn three while defending from the charging Renault of Daniel Ricciardo forced him to pit early for fresh rubber. Albon’s pain benefited Ricciardo greatly, however. The on-form Aussie pressured Charles Leclerc in a slightly improved Ferrari SF1000 throughout the early laps before passing on lap 9 with a fine example of a switchback overtake in turns 1 and 2.

Any of the lucky few fans who attended the Grand Prix with seats at the first corner enjoyed a seemingly endless amount of action. Not long after Ricciardo’s 4th place pass of a Ferrari into T1, the same corner created issues for Sebastian Vettel in the other. Vettel’s perpetually frustrating season continued as he spun under braking when attacking Antonio Giovinazzi. Vettel fell down the order and was nearly involved in another incident with an Alfa Romeo at the very same spot. Instead, Kimi Raikkonen oversteered his Alfa into the Williams of George Russell as the Finn attempted to avoid running into the back of Vettel. Russell’s race was over with suspension damage from the crash, and the stewards promptly hit Raikkonen with a 10-second time penalty in his record-breaking 323rd Grand Prix.

But the most impactful turn one incident was between the battling Mercedes. With Hamilton not letting Bottas run away with the lead, as is often the case when the roles are reversed, Bottas out braked himself and locked his front right in the downhill braking zone, allowing Hamilton through. Valtteri pitted immediately from second, which may have handed the lead back his way by virtue of the undercut. However, fate was not on his side, and the unwanted honor of being the first Mercedes team DNF of 2020 was his thanks to a power unit issue. The Finn’s delight on Saturday afternoon had turned sour just 24 hours later.

Bottas wasn’t the only car to retired in an oddly high race of attrition. After battling from the back of the pack thanks to his early pit stop, Albon retired his Red Bull after getting a 5-second penalty for taking Daniil Kvyat’s front wing off before the last corner. Albon complained on the radio that the AlphaTauri drivers’ ‘always race him so hard‘ after nearly hitting Pierre Gasly too. But it was his own mistakes that ruined his race before his enforced early retirement. Esteban Ocon and Lando Norris also retired their cars, the Renault with hydraulic failure and the McLaren power unit giving up after many laps being down on power. 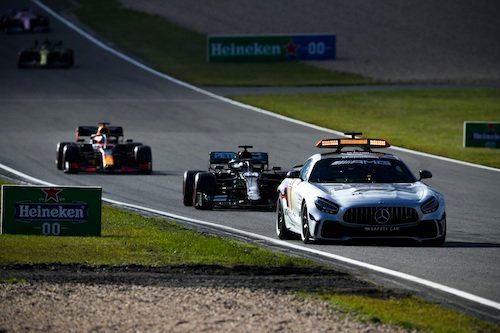 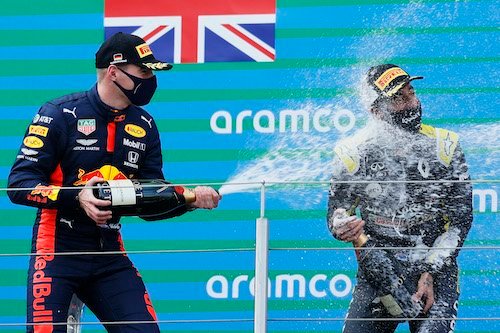 With both Bottas and Albon out of the race, there was a guaranteed slot for a non-Mercedes/Red Bull driver on the podium, giving the remaining midfield cars some silverware to race for. Thanks to the Ferrari upgrades, Leclerc’s return to pace initially had the Monegasque as the nearest challenger to Daniel Ricciardo, who was now in third place. However, the Racing Point/McLaren/Renault trio still have the edge on the scarlet car. Despite positioning his car well, Leclerc was powerless to defend against Sergio Perez and was out of the hunt.

Norris’s retirement triggered the only full safety car of the race. The gap Ricciardo had built to Sergio Perez in fourth-place was immediately cut to zero. The silver lining for the Aussie was that he could enjoy a ‘free’ pit-stop and defend against both Perez and Carlos Sainz behind him with maximum grip in his Pirelli’s. But in the end, Ricciardo’s third place never looked in doubt, and the safety car period didn’t affect the final running order at all. Ricciardo looked delighted at his first visit to the podium since his win at Monaco in 2018, and Renault’s first since 2011.

The headlines of the day, though, belonged to Lewis Hamilton, who matched a record that many had thought would stand for decades. Michael Schumacher won 91 Grand Prix in his career, and that is the number of race wins the six-time champion now has. Hamilton equaled the record at a track that has corner names dedicated to the great German driver. Michael’s son, Mick, congratulated Hamilton post-race and presented him with a helmet belonging to his dad. With Bottas falling a further 25 points behind, Hamilton will almost certainly match Schumacher’s record of seven titles very soon, too.