Dubai – The city of bold and beautiful architecture 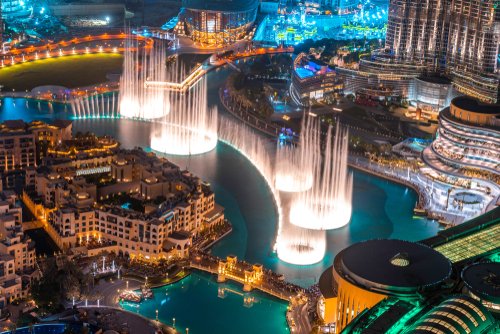 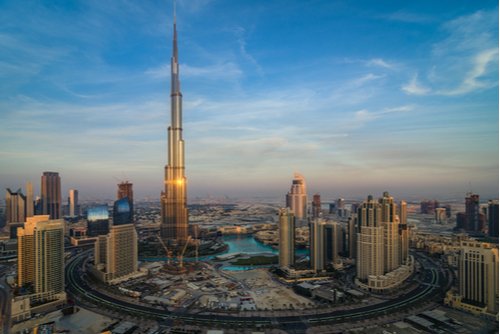 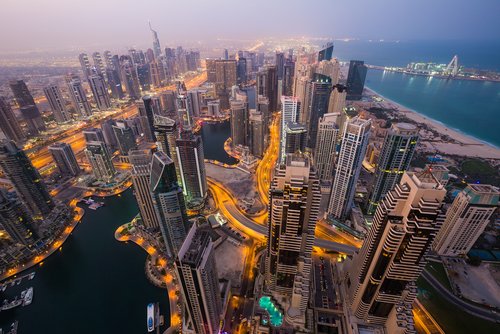 Dubai, the United Arab Emirates’ most populous city is the top travel destination in the Middle East. It is the city that many of the rising Arab nations want to emulate. Qatar’s capital, Doha, is said to be following the blueprint of Dubai which has gone from a little-known desert outpost into one of the leading travel destinations in the world.

In 2019, over 16.7 million travelers descended on Dubai. Many of the visitors experienced the city’s great shopping and cultural attractions. Dubai is also home to a few attractions that will please car enthusiasts. It’s proximity to Abu Dhabi means visitors can take a day trip to the Yas Marina Circuit which also has plenty to offer the hardcore petrolhead.

Bus: The bus service in Dubai is operated by the Roads & Transport Authority (RTA) and covers more than 100 routes in the city. Train: The Dubai metro is considered to be one of the most modern and cost-effective public transportation systems in the world. The service covers nearly 50 stations and operates from 5 a.m till midnight. Taxi: Taxis are the most convenient way of getting around the city. All taxis are metered.

Ride-Hailing: Uber, Careem, Blacklane
Bus: Several buses are available at the airport. Buses arrive and leave from stands opposite Terminal 1, 2 and 3. Train: The Dubai Metro is a sleek, modern rail system with two connected lines and a route that links the airport with the city center. Taxi: Taxis are available 24 hours. The taxi ranks can be found directly outside each of the terminal building arrival areas.
1 equals

Ghuzi is a Dubai dish made from a whole-roasted lamb or mutton. The meat is typically served on a kebab skewer alongside vegetables. Rice accompanies the meat to make it a full meal. The rice usually has a nutty flavor thanks to being dished up with hazelnuts. Ghuzi is so popular that it is the United Arab Emirates' national dish. You must eat it while in Dubai to get the full feel of the desert city. As with many of the dishes in Dubai – and other areas of the Middle East – it migrated through the region with each area has its own take on the dish. 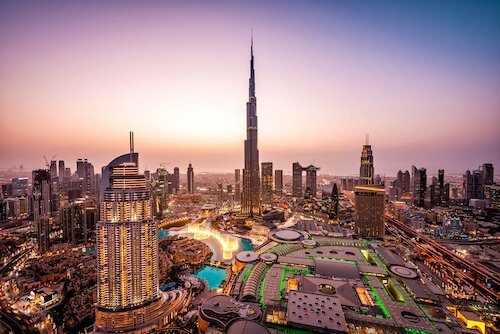 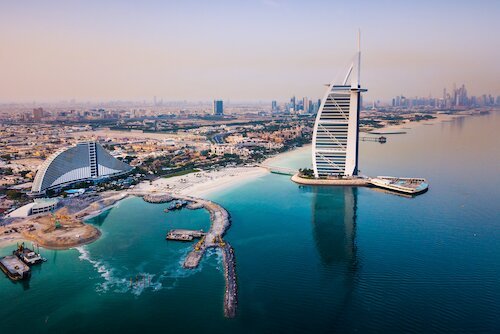 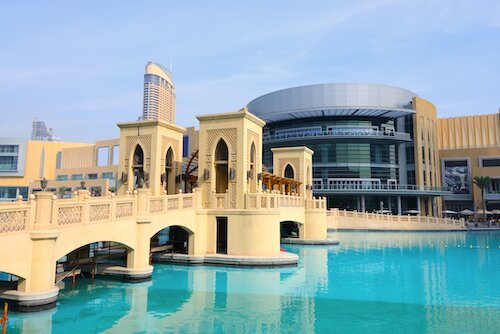 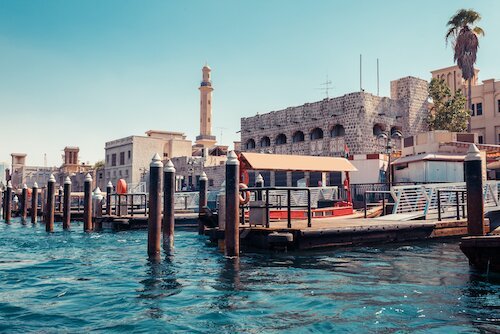 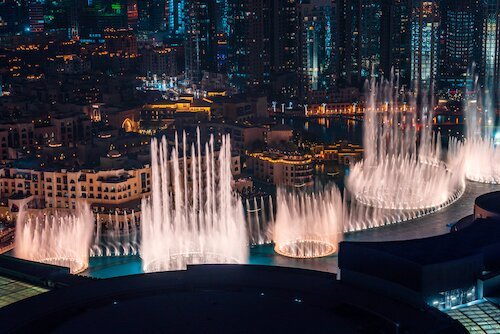 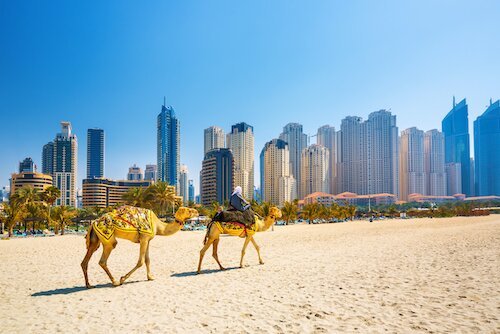 There is no tourist attraction in Dubai that tops the Burj Khalifa. The towering building stands 829.8 meters tall and provides some of the best views of the city and surrounding areas. The observation deck is the main attraction of the Burj Khalifa. It allows guests to see the entire city skyline. Travelers can walk around the 360-degree observation deck to see the entire cityscape. There is also a documentary film available for visitors to watch that teaches them about the building and its construction.

Dubai Autodrome gives visitors the chance to drive a number of dream cars around its circuit. Car enthusiasts can choose from one of a McLaren Sprint, Ferrari GT, Formula DXB (open-wheel), and other cars. Drivers can get behind the wheel and speed around the Dubai Autodrome just like their racing heroes.

Dubai Autodrome also gives visitors with their own vehicles the chance to test them out on the circuit. Track Days give drivers the opportunity to enjoy real race standards while sitting in their car.

There is also a Kartdrome that allows visitors to drive a kart around its indoor and outdoor circuits. This experience gives car lovers who may be intimidated by a real race track a chance at racing in a more tame environment. The significantly lower age restrictions also mean the kids can join in the fun.

Travelers will be struck by the unique design of the Burj Al Arab. It is one of the world’s tallest hotels and stands at 321 meters tall. The Burj Al Arab was built on its own artificial island and sits out in the Gulf waters. The Burj Al Arab was designed to look like a traditional Arab boat’s sail. It gives the hotel a unique look that sets it apart from the rest of the creative architecture in the city. Rooms at the Burj Al Arab do not come cheap. A luxury suite will set holidaymakers back around $15,000 per night.

The hotel has six great dining experiences, but the pick of the litter is the Al-Mahara Restaurant. It has floor to ceiling windows that allow diners to be surrounded by an aquarium. Guests can dine while sea life swims all around them.

Desert driving/dune bashing is one of the most popular experiences for tourists in the United Arab Emirates. Travelers will head into the desert on a guided path in a 4x4 SUV. There, the driving experience begins as tourists hit the dunes at high speeds. 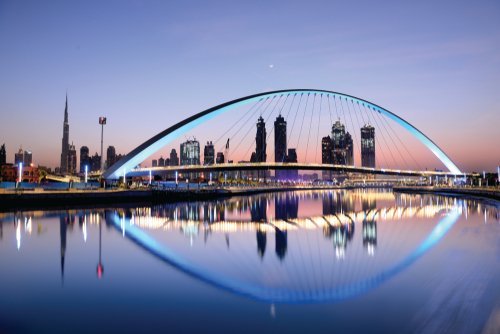 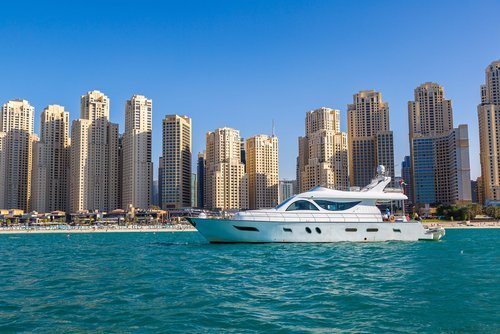 Other desert driving experiences include mountain safaris. Visitors will take to the desert roads and head for the Hatta Mountains. On the way, they can take a refreshing dip in the natural pools or hike the dunes. There is also a Land Cruiser Safari and BBQ experience visitors can choose. After driving up and down the flowing sand dunes, travelers will enjoy a BBQ in the desert and a night at a Bedouin-style camp.

Located next to the Burj Khalifa, the Dubai Mall is not only the best place to shop and eat in the city, but it is a great way to get out of the heat. Visitors can get to the Burj Khalifa entrance and Dubai Aquarium via the mall. Travelers can experience all three venues easily on the same day. In addition to the abundance of places to shop and eat, the mall also has regular events to entertain customers.

The Al-Fahidi Fort is the location of Dubai Museum and one of the must-see attractions in the city. The fort was built in 1787 and originally protected Dubai Creek. The exterior offers visitors a look at the region’s traditional architecture. Inside the fort is the Dubai Museum which gives everyone a look at the rise of the oil-rich Emirates’ city from past to present. The exhibits are truly amazing and offer a glimpse into the history of a city many people believe popped up overnight.

Dubai is likely the most popular tourist destination in the Middle East. With the rapid development rate the city is currently undergoing, it seems there’s always something new to see here. With so many great attractions, Dubai is a perfect holiday locale for anyone looking for something new.