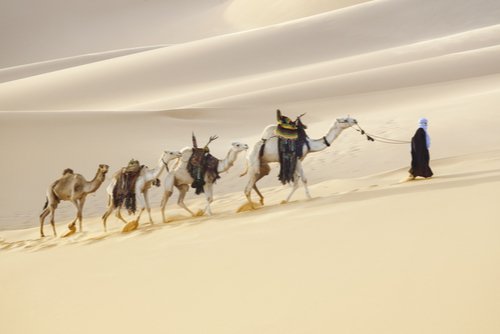 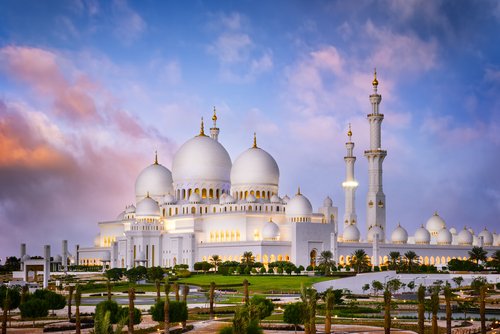 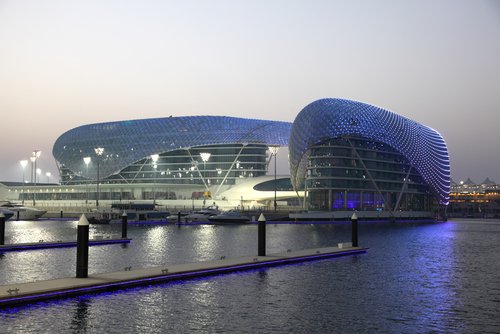 Abu Dhabi is an oasis in the desert for travelers. Anyone looking for the hottest destination with its own unique tourist attractions should look no further than the capital of the United Arab Emirates.

In 2019, over 11 million tourists visited Abu Dhabi. Many of these visitors experienced the city’s beaches, shopping malls, restaurants and car-themed attractions. Thanks to flights via Etihad Airways from major cities around the world, tourists can enjoy the sights, sounds, and sun of Abu Dhabi in no time.

Bus: The Abu Dhabi Department of Transport operates a robust and relatively cheap bus network within Abu Dhabi city and to and around other parts of the emirate. Taxi: Taxis are the most convenient way of getting around the city. All taxis are metered.

Ride-Hailing: Uber, Careem, Blacklane
Bus: The bus service at the airport is run by Abu Dhabi economic public bus system. The buses are located at the lower curbside outside each terminal and depart every 40 minutes. Taxi: Metered taxis are available 24/7.
1 equals 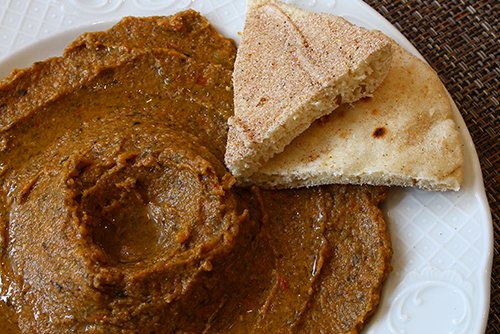 Madrooba is a popular dish in the United Arab Emirates and is widely eaten in Abu Dhabi. The meal is made using seafood – any fish will do - that has been salted. This is known as "maleh." Maleh is a delicacy in Abu Dhabi, with many restaurants serving it. The fish is rinsed thoroughly before being place into a pot of water that is seasoned with spices. Flour is slowly added as the fish and spices combine, thickening the fish/water broth into a sauce. The finished madrooba will then be served with flatbread (naan) and ghee. Madrooba is a demonstration of the UAE's cuisine from when the country was known for fishing and not oil. 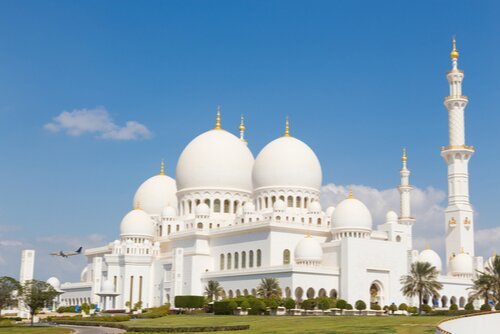 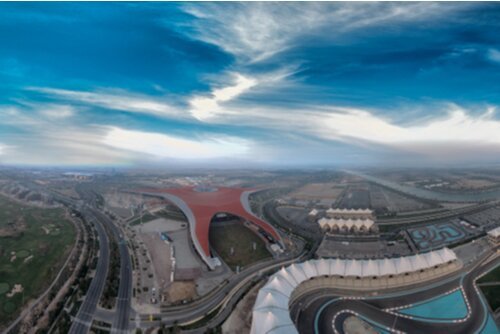 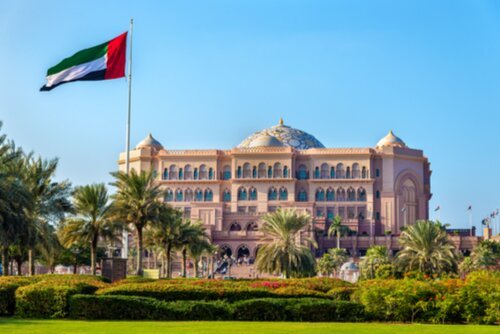 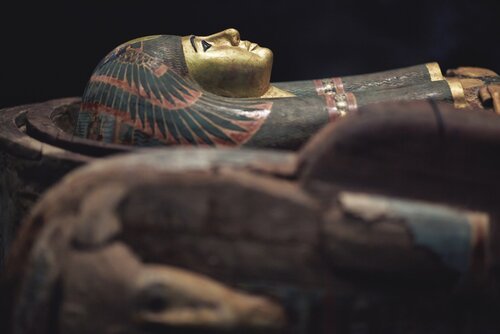 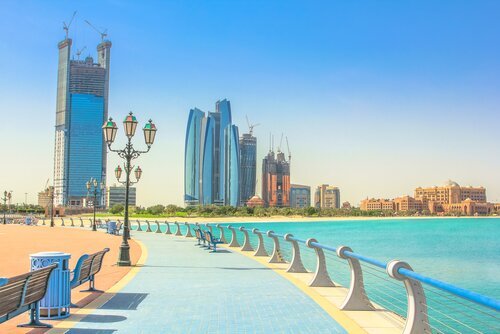 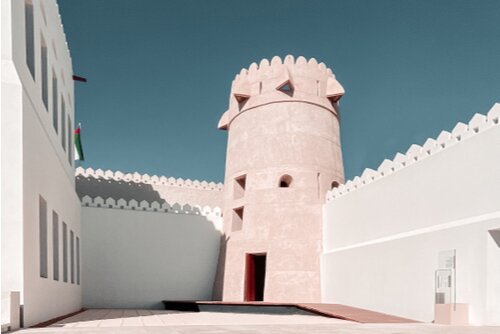 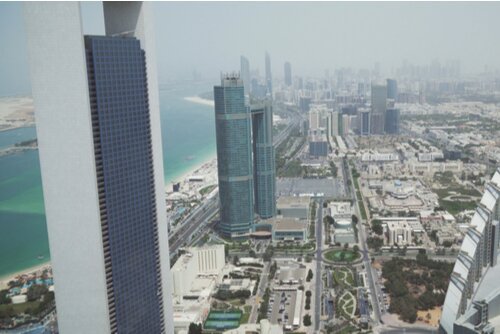 Opened in November 2017, the Louvre Abu Dhabi is the largest art museum on the Arabian Peninsula. The museum was established thanks to a partnership between Abu Dhabi and the French government, and it sees the Arabian city paying a hefty fee to carry the iconic museum’s name.

The French government allows the UAE capital to use the original museum’s name and to loan artworks that are housed in the Parisian gallery. The Louvre Abu Dhabi hopes to bridge the gap between Eastern and Western art, and it appears that the emirate’s leaders were willing to invest heavily to make Abu Dhabi a top destination for art enthusiasts. This conviction is evident in the bold design of the museum’s exterior and interior.

Located on Saadiyat Island, the museum is another exceptional addition to the cultural district. The island is currently seeing a lot of new development. It will showcase eight different museums and a number of leisure centers for tourists to enjoy once it is finally completed. The Louvre Abu Dhabi is the main focus of the island, and its exhibits will thrill art lovers during their Emirati holiday.

Ferrari World is an exhilarating thrill ride for car enthusiasts and theme park lovers. The theme park is designed for family fun, and many of the attractions are kid-friendly. There are also plenty of rides for mom and dad.

The racing fan in the family will find adrenaline pumping, hair-raising racing-themed rides including Formula Rossa, which is the fastest roller coaster in the world. The Fiorano GT Challenge will propel you at speeds of 95 km/h in a Ferrari F430 Spider. The circuit was created on a real GT racecourse, and it will send you down twisting parallel tracks. It is just one of many fast rides available to visitors.

After experiencing the Ferrari fun rides and rollercoaster, you can dine at one of the six Ferrari World restaurants. There is also plenty of shopping to do, so the Ferrari fan in the family won’t miss out on great souvenirs from the Italian car maker.

Home to the Abu Dhabi Grand Prix, the Yas Marina Circuit is arguably the most modern circuit on the Formula One calendar. This destination offers visitors the chance to feel like a real Formula One race car driver. It provides car lovers the opportunity to drive the custom open-wheel car called the Formula Yas 3000 or GT cars from Aston Martin, Ferrari, and Mercedes. 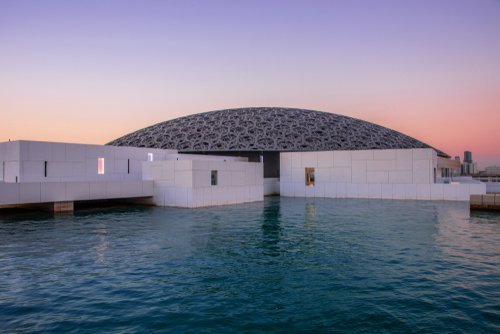 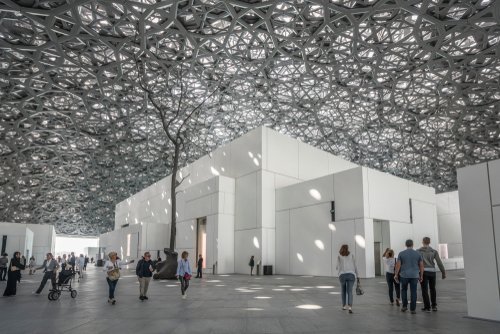 One of the most impressive aspects of the circuit is it takes you through the Yas Viceroy Hotel. The hotel makes an excellent base for anyone in need for speed as the Yas Marina Circuit is built around it. In certain rooms, you will be able to see the track right from your window. Now that is what every car lover wants to wake up to.

There is also a dedicated drag racing center at the Yas Marina Circuit. So, no matter what kind of car racing you prefer, there is the chance to do it.

If getting behind the wheel is a little too much, there is always the tour of Yas Marina Circuit. Take a tour of the venue and see just where the big boys of Formula One spend their time when competing at the Abu Dhabi Grand Prix.

Abu Dhabi has some of the most unique buildings being constructed today. They house hotels and companies from around the world and offer a brilliant skyline to the city. Just wandering around Abu Dhabi will give you the chance to take in the great city views.

If you want to look down on to Abu Dhabi and everything around it, there is no better venue than the Jumeirah Hotel at the Etihad Towers. Located on the 74th floor, the Observation Deck gives at 300 gives you the chance to look out over Abu Dhabi and the Gulf coast. There is a fee for non-hotel visitors to explore the observation deck but the good news is you can redeem the ticket for food and drinks at the restaurant located on the observation deck.

Abu Dhabi is a travel experience unlike any other. It is the gateway to the rising Middle East. The city bridges the gap between east and west, and its many tourist attractions offer visitors a unique holiday experience.